This was the 5th annual reading of this ongoing group, with 14 readers today (only 2 were men), held at the Bethlehem Public Library in Delmar, NY. There were poems, of course, but also prose, nearly all memoir, with 1 lone novelist. One interesting bit of programming was the pairing of a poet with each prose reader. The poet read a poem, dubbed an "echo poem," that related in some way to the theme/topic of the prose piece. 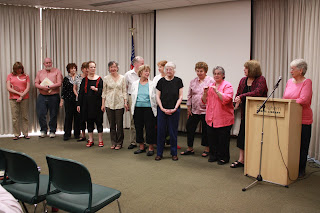 Among the poets who had their own slot were Marion Menna, reading from her chapbook Deep Ecology (Benevolent Bird Press), Sharon Stenson & Faith Green reading selections of their poems, Kathy McCabe with "Humorous Rhymes," & Alan Casline with a single poems from his Perious Frank series. Also, at the end of the reading the poets who had been paired up with a prose writer got a chance to read another poem on their own.

The reading was marred by the fact that there seemed to be no designated MC or host, each reader was apparently supposed to announce the next reader, but few did. Eventually Mimi served as ersatz host announcing the next reader from the audience. Although there was a printed program of the reading & bios of each reader, I think one someone announces the reader's name it is a way of paying respect to them & of letting the audience know who the person is.

But there were excellent refreshments & the program moved along, even with a break in the middle. The Delmar Writers meet on the first Friday of the month at 1:00PM in the Board Room of the Bethlehem Public Library. If you are interested in joining the group contact Marion Menn, maripoetm@aol.com, or 439-3991.
Posted by DWx at 11:37 AM

Thanks for reviewing - what did you nthink of the prose and poetry reads by the writers (aside from the echo poems)?