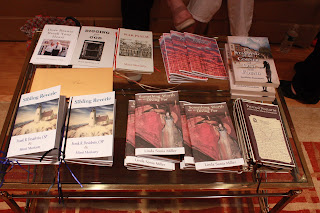 This reading, hosted by Mimi Moriarty at the Pine Hollow Arboretum in Slingerlands, featured 5 poets published this year by Finishing Line Press.

I am most familiar with Jan Tramontano's Paternal Nocturne which she has been reading around at various venues, including Albany WordFest. This evening she read 2 poems from each of the 3 sections of the chapbook, poems based on letters home written by her grandfather in the 1930s & 1940s. She ended with "the most personal" poem in the book, her own tender letter to him, "Letter 2011."

Mimi Moriarty & her brother Frank Desiderio's chapbook Sibling Reverie pulls together some of their "companion" poems they have been writing & performing for a number of years. They read 4 sets, some like "A Matter of Substance on my TV" (Frank) & "Mummers Parade, January 1, 2010" because they were both there; others pairings, notably "Afternoon Recreation" (Frank) & "Jesus at Bat" (Mimi) came about because they discovered that each had written about Jesus & baseball (which would almost get me to go to church again).

I was least familiar with the work of Linda Sonia Miller, whose chapbook from Finishing Line Press is titled Something Worth Diving For, which she said was an oblique reference to Adrienne Rich's work. She began with a few recent poems not in the chapbook, "The She-bear's Lament" & one about living in Paris in her youth, another about Thanksgiving. The poems she read from the book included the marvelous childhood memoir in the Bronx, "Poetry," & one about watching herons.

I've also recently heard Cecele Allen Kraus read from her captivating chapbook, Tuscaloosa Bypass, memoir poems of growing up in Alabama. She read the beginning ("Every Sunday Morning") & concluding ("Mississippi Encounter") poems, & others. I was particularly moved by the poem "Mirror" about a dead brother, & the companion piece "Three Sisters."

After the reading, the group fielded questions about being a poet & their experiences with the process of being published by Finishing Line Press. All in all a pleasant evening of poetry in the front room of the Pine Hollow Arboretum, a light & airy setting for small readings.
Posted by DWx at 4:16 PM