Calling All Poets! is a popular name for a reading series (there is one over in Connecticut with the same name), this one held the first Friday of each month at the Howland Cultural Center in Beacon, NY. I read there a few years ago & the folks who run it, Jim Eve, Mike Jurkovic & Robert Milby are actively promoting local & regional poets.

I was the first of 2 featured poets & began the night with a mixed bag of mostly recent poems, starting with a poem by Catherine Connolly, "Ending," then my poem in her memory, "Something That Matters." In honor of the students gunned down at Kent State on this date in 1970 I read my poem from 2010 "44,000." Then the cluster of poems I wrote in Florida this January, & the 4 Coyote poems. The older poems were "The Lady Bishop" &, from boundless abodes of Albany "My Sather Gate Illumination." Then ended with a couple from Poeming the Prompt (a good marketing ploy because a number of people bought books). 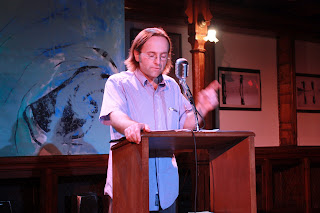 Robert Milby, the whirling dervish of the lower Hudson Valley poetry scene, read next & he too likes to begin with someone else's poem, tonight Thomas Kinsella's "Ancestor." His poems are often situated in the natural world, such as "July's Slash & Burn," the family story "Catherine's Oaks," & "Flood Plain," even his "Coyote" poem about finding a roadkill. He included a couple with references to classical music, "Rosamunde Revisited" & one on hearing Brahms on his radio in the kitchen & backyard. From his chapbook Crow Weather (Fierce Grace Press, 2009) he read "The Memory of Fire" & "The Dead Have No Truth" (after reading Anne Sexton). Other poems from writing were "Barrows Full of Bones & Memory" (after reading Dracula) & "Contracting Hank" (Bukowski, of course). & what would be a Milby reading without a ghost poem? He ended with one, "The Green Medusa."

After a too-long break the surprising long line of open mic poets began. Were all these folks in the house when I & Milby read? Glenn Werner, who also makes poetry happen in the area, began the open mic explaining tidal bore, followed by Ken Howard with a couple poems. Chris Peña's 2 poems ranged from tender to vicious, while husband Tony Peña's "Day Tripper" was a rambling druggie surrealistic romp. Robert Phelps' poems were trees & squirrels, followed by "Ivan Smirnoff" with an accent that sounded more Irish than Russian. Another local stalwart, Christopher Wheeling read a just-written piece & "The Ink Well" (revising the title at the mic), then John Douglas with a portrait of a recluse, followed by Kenaya Massaline also with a brand-new poem & tender one for a late friend, "Dear Raoul."

Hayden Wayne read Cherokee & English from his book, whose title I missed. Stephen Coyle read O.P.P. (a poem by someone else), launched into a lecture about corruption in Iraq (duh!) then wanted to do another poem (after already going way too long) & someone, who didn't sound like either of the tag-team hosts said to go ahead. This was indicative of the chaotic way the open mic was being run. After the first couple of poets neither of the hosts came up to the mic to announce the next reader, but called out the name from the back of the room. Sometimes people were still applauding, sometimes the name was unclear but I'm sure I'm not the only one who frequently didn't know who was reading. It's not just important for a nut like me trying to keep the archives accurate, but also does a disservice to the poet themselves: when I get up to read I want the folks in the audience to know who I am, what my name is. Fortunately for me I was able to hijack the sign-up sheet before heading out.

The next poet was a good example of that: it was Eve Hinderen's first time here, with a rant & a Wal-Mart Barbie poem, but when announce I only heard "Eve." Likewise, the next poet, Ras Negus, but then his name would've been difficult anyways. He began with "Dis Poem" by Jamaican poet Mutabaruka, then his own "Nature's Holistic Paradise" but then asked (& was granted permission) to sing "a short verse" that went on for another 2 minutes. Co-host Mike Jurkovic did a couple poems, one with a bra in it, then Stephanie Luzzi read, & another first timer, Michelle Johnson, then Franklin with one of his poems in a faked Polish accent, & finally the last reader of the night Sonia with a couple of personal essays.

It had been a long night, at least for those of us here from the beginning. Calling All Poets! is held each first Friday at the Howland Cultural Center in Beacon, NY, 8PM, with featured poets & an open mic. The website doesn't seem to be up to date on the schedule, but can give you directions.
Posted by DWx at 3:15 PM