This was a reading & book launch for Harry Staley's long-awaited book, Truant Pastures, The Complete Poems of Harry C. Staley (SUNY Press). Harry is a UAlbany Professor Emeritus in English & a poet who has read in his heyday throughout the community, including the Readings Against the End of the World & Poets in the Park. He taught at the University from 1956 until he retired in 1993.

But first we heard from poet George Drew, reading from is introduction to Truant Pastures, some poems from his 2010 collection The View from Jackass Hill & some new poems. In addition to paying tribute to Harry Staley ("The Annexation"), George also paid tribute to other professors he studied under in such poems as "Making Up With Milton," "God in the Hands of an Angry Sinner" & "The Older I Get the More I Think of Keats." He also paid tribute to the poet/psychotherapist Paul Goodman ("Doing Dante One Better") & to the influence of Hayden Carruth on his work. 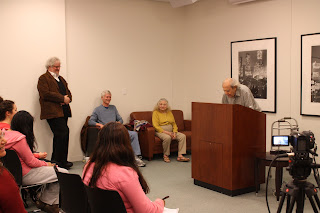 George introduced Harry by reading Harry's poem "Parakeet & Pilot." But it was Harry Staley we all came to see & hear. His poems are always touched by humor & fun with word play. "Obese as Buddha" is a meditation on the poet snorkeling, then into the stunning play on sound & meaning, "Chalk It," which he can still deliver with energy & panache. He included "Preliminary Report from Dr. Peters, Geo-therapist," then a series of the anti-war/ war poems, "Penmanship," "Argument from Design," a couple sections from "Nocturnes (from early films)." That was enough for Harry, but his fans called him back to read "Biology One," & "Take Us In Mister."

It was a thrill to see Harry Staley back out to publicize this ultimate collection of his poems. Age is taking its toll, as it does with us all, but Harry always seemed to have great fun at his readings & he glowed with that joy & energy again today.
Posted by DWx at 4:54 PM

That was a special occasion. Thanks for recording it.