Live from the Living Room, May 9

Tonight at the recently refurbished Pride Center there were some folding chairs for the poets, but still no comfy couches -- still better than sitting on the radiator, as some did last month.

Waiting for the feature to arrive, our host Don Levy started the open mic as poets began to arrive, quite a good group tonight, with poets coming out of the woodwork who have not been out in a while. Sylvia Barnard was fresh back from a trip to Israel & read 2 poems from her trip, the blood & Apocalypse of "Israel 2012" contrasted with the more gentle images of "The Garden Tomb." I followed with 2 recent poems, "For Moses Kash III" & one for the 100th birthday of the Oreo cookie back in March, "Ode to the Oreo."

I had not seen Kim Henry reading her poetry for a long time & tonight she read a poem about death that she wrote today after not writing poetry for 4 years -- yay! Kim, come back soon. Tess Lecuyer said it was Joy Harjo's birthday & read 2 of her poems. Kristen Day had also not been out out in a very long time & started with a haiku for a clogged ear, then the work-related "Summary of a Meeting" (she is always good with the work-related stuff). 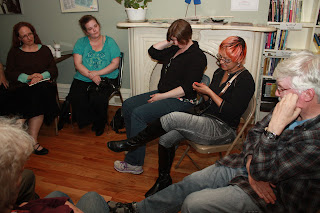 Emily Gonzalez is slowly inserting herself back into the local scene & read a poem for a friend from her phone, on death & dying. Bob Sharkey crammed 5 days of WordFest into 1 64-word poem, "Trip Wire" -- amazing! -- then read "Cycles" with Guinness & Earl, back again. Somehow before Julie Lomoe read Don got into a discussion of the soap opera, General Hospital, then Julie read her old poem "Bi-Polar I." Rob Smith rarely reads out but wrote a poem written today after lobbying at the State Capitol on trans-gender issues, a poem about the sculptor Constanin Brancusi, "Re-encountering Brancusi." Avery began with a poem from last year on the assassination of Osama bin Laden, "And there Was Much Rejoicing," & followed with a feel-good piece in advertising-speak on smiling (just like the nuns used to tell you).

Our genial, chatty host Don Levy read 2 newer poems that can be found on his FaceBook page, "Sunspot" & "Cowboy Josh." Jenna, who was the volunteer at the Pride Center's cafe tonight, was our last poet & read from her laptop a poem she said she could sing, "Freedom Flows," a work-in-progress. That's what open mics are for: to try new pieces out, to work on the works-in-progress.

Now usually there is a featured reader who starts off the night & one had of course been scheduled but never showed. But with tonight's array of open mic poets we barely missed him. Too bad. Usually on the 2nd Wednesday of each month at the Pride Center of the Capital Region on Hudson Ave. in Albany, NY, in June there will be no open mic (too much else going on here for Pride Month), but will be back in July. & always straight-friendly.
Posted by DWx at 7:08 PM