Since 2005 this has been an annual event, first at the Lark Tavern, now at McGeary's on Clinton Square in Albany (NY). We started in 2005 when Poets Speak Loud! began as an open mic on the last Monday in January. Tom Nattell, who had been the host of the last Monday open mic at the QE2 punk-rock club on Central Ave. for many years, was the scheduled poet for the inaugural reading, but left us that very AM due to cancer. That year, & for many others, after the open mic we trekked to the statue of Robert Burns in Washington Park to ceremoniously place a beret on the head of Robert Burns in Tom's memory.  When the Lark Tavern succumbed to flames a couple years ago & the monthly open mic moved to McGeary's the memorial "beret toss" has taken place before the reading. This year a new wrinkle was added:  a "pre-game" party held at the apartment on Willett St. of "statuesque" poet Carolee Sherwood -- it was a dazzling array of poets for beer, wine & cheese. 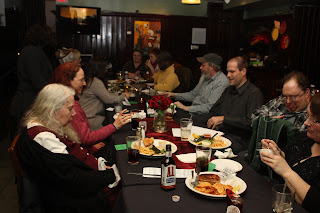 About a dozen or so showed up for the "beret toss" which Ed Rinaldi facilitated, then on to dinner, drinks & snarky remarks at Tess Collins' McGeary's. For the open mic I was the guest  host (another tradition of this event), with 17 signed up. Most of us were clustered around the communal center table, ably served throughout the night by the lovely & every efficient Allison. I began with a short poem for Tom, "Theology 101," then on into the open mic, "old school."

First up was the venerable Sylvia Barnard, a veteran of Tom's Readings Against the End of the World & the open mic at the QE2, with a couple of anti-war poems. Dain Brammage got nostalgic over "Glass Bottles." 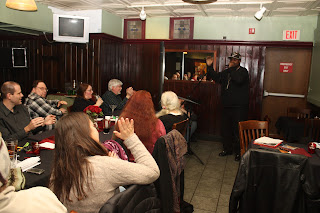 A new performer here, Kidd Dynamite, performed a piece called "Unfamiliar Faces" with backup from his laptop. Carolee Sherwood described her poems as "newish," one titled "January Divorced from Winter,"  then a poem for the new year, a love poem "To My Dearest Friends…" Mojavi began, as many did this night, with a personal remembrance of Tom, then to an "old" environmental poem "We Murder Sunsets" & then another poem beginning with stark images of a deceased person's belongings tossed on the sidewalk, but our memories linger on.

Tom joined us via the 3 Guys from Albany tape/CD with piece he liked to do when performed in schools, the memoir "South End." Sally Rhoades who said her first reading at the QE2 was in March 1990, said she was more Walt than Emily in her poem "I Contain Multitudes." Bob Sharkey commented on Tom's column "The Simple Life" that appeared every other week in Metroland, & read his poem responding to that, "Tom's Rags." Don Levy first appeared at the QE2 in May 1988 & read his memoir of his first reading, "Loosing My Virginity." Tess Lecuyer was also an early habitué of the QE2 (I have a picture from April 1988 of her reading there), tonight read a recent piece rich with images with the working title "January Snow-shoeing at Little Notch." Mary Panza who did not read tonight, but acted as a very bossy stage-manager (are you surprised?), had been at the QE2 open mic as early as July 1988, just for the record.

Cheryl A. Rice, who had put in her time in Albany & the early poetry scene (my earliest photo of her is from the QE2 in February 1993), drove up from Kingston, read a poem about her father delivering hay from Long Island, "Hay Run." Jill Crammond delved into the Lives of the Saints with a bad girl poem, "St. Monica Defends her Decision to Elope with a Bad Boy." Ed Rinaldi has been writing a poem a day, & read one of them, "Just Typing the Words America the Beautiful." Josh McIntyre's short piece "Convalescent" was about writer's block, or just waiting it out.

Kevin Peterson was too young to have been at the QE2 but has been following in that tradition; he recited a short piece on the enigma of women, then read "Youth in Excess," both worthy of the QE2 stage. Poetyc Visionz (also too young to have been to the QE2) did his piece, "I Have a Beautiful Mind", then another piece on negative thinking & the need to "Keep the Faith, Baby." RM Engelhardt who first read at the QE2 in April 1991, read "Think Beautiful: a Poem for Tom Nattell" (that Rob had read at the 1993 Readings Against the End of the World), & his tribute/memoir poem on the QE2 "In a Place of Sound & Light." Avery finished out the open mic list with his memoir of the Lark Tavern & past beret toss "As the Star Dust Twirls" & a poem from January 1999 about finding God as someone who is drunk, cold & annoyed.

I closed out the night with a reading of my poem "Chasing Tom" which has been published in the 2011-2012 issue (#39) of the Paterson Literary Review. Then Tom, from the 3 Guys tape, reading "Rhinoceros." & a big thanks to everyone who contributed to the Tom Nattell Peace Poetry Prize.

While the beret toss only happens once a year, we gather at McGeary's on the last Monday of most months for Poets Speak Loud! sponsored, coordinated & created by AlbanyPoets.com.
Posted by DWx at 6:03 PM

been checking in periodically to read about this year's beret toss...
charlie

Lovely pic of me rifling through my book bag. Most people ask people to say chese, lol!