The house was packed for the 2 featured poets, Stu Bartow & Paul Pines, but, of course, much thinned out by the time the last open mic reader hit the stage. But first, our host, Carol Graser, began with a poem titled "A Bowl of Warm Air" by Moniza Alvi (if I got that right).

A quartet of Caffe Lena veterans started off the open mic: Alan Catlin, with "False Spring" (where the crazies come out), Carole Rossi Kenyon (I don't recall the middle name being used before -?) with a poem about cruising a party, Sue Jefts with 2 poems, one about her beloved Hudson River, & Carolee Sherwood reprising the poems she did at McGeary's (& I got the full title of "To My Friends on the 1st Day of the New Year" this time). Then 2 readers for whom it was their 1st time here. Catherine Norr read a poem about quilting ladies, "Shop Talk," then another about her hometown, "Crescent City Riverside Chat" (i.e., New Orleans, LA). Carl Dana read "The Widow's Awakening," then a garland of seasonal haikus (setting off a theme for the evening). 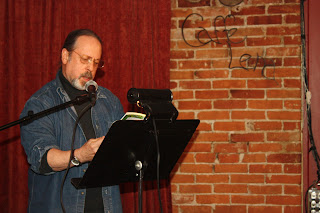 Paul Pines was the proprietor of my local bar, the jazz joint, The Tin Palace, when I lived on 2nd St. in NYC in the mid-1970s. & when I moved back to upstate New York many years later I was pleased to see he was not only one of the region's practicing writers but also still creating jazz events in the area, specifically the Lake George Jazz Festival each September. He has written poetry, novels, & memoirs. Tonight he read from a work that combines poetry & memoir with history & anthropology, Reflections in a Smoking Mirror: Poems of Mexico & Belize (Dos Madres Press, 2011). I've enjoyed reading this book, awash in imagery as lush as the tropics & hearing the poems in Paul's voice only made the poems more vivid. 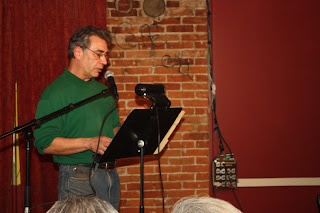 Stu Bartow was back as featured poet, having been featured at Caffe Lena back in October of 2009. He read briefly from a new book Questions for the Sphinx (WordTech Editions, 2011), then on to some new poems about physics & astronomy, such as "Chaos Theory," "Love in the Age of Global Warming," & "Absolute Zero " (based on Wallace Steven's "The Snow Man"). Other poems included "Hades & Grand Central Station," & a beguiling poem about Albert Einstein helping a young neighbor with her math homework. Stu was very generous with his books, offering a number of his recent publications at discount prices so he "didn't have to lug them home."


Carol Graser returned us to the open mic with her cleverly constructed poem "The Haiku" (with the poetic form as a person). Tim Snyder was the first with of a couple of poems who referenced back to the divorce poem of Carloee Sherwood, with "Window Gazing," then the more passionate "Tranquility." Ed Wilks was the first of a series of the night's poetry virgins, with a poem titled "Set Me Down Set Me Straight," & another on looking back to his youth as Time passes. I followed with a remembrance of last week's Florida vacation, "Arts Festival, Delray Beach" done in the style (or almost) of Alan Catlin's poems in his recent book Alien Nation, then a trio of Winter haikus. Another poetry virgin, Don Mangiana's poems were in short line rhymes, the first about cats, the second about a dog. Alan Casline said his poem "Four-Fold Vision of the Vale of Tawasentha" was "a clever-mind poem" based on William Blake's series of paintings & engravings on Dante. 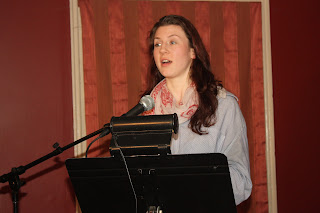 Meredith's 2 poems were both tilted "Hooked" & were both brief love poems. Charles Watts' poems ran the gamut from "Pissing on Pyote" to the tender gift of November mornings in the high peaks, "To My Granddaughter." Nancy DeNofio's memoir of her childhood, "A Quiet Place," was about a church confessional. W.D. Clarke read 2 family poems in ballad-style, as is his wont, the first about "The Rag Man," the second, titled "The Gift", was about his Aunt's gallstone, which he brought as a poet's show-&-tell, in case you ever want to know. Joe DeBerry read a poem for his friends titled "Over & Over Again," then referenced Carolee Sherwood's poems introducing his piece on men v. women.

Alex Gilmore modified the "1st time" claim as "1st time on stage -- sober" (one can only imagine); his poems were "The Finding" & "Moment of Peace." Patricia K. (or was that "Kay"?) read 2 similar, emotional, pieces about friends who have gone before, "Angel" & "Stan." Mary Cuffe Perez read 2 sections from her recently published novel in verse, Nothing By Name, based on a woman she knew in Galway, "Trick of Time" & "Going to Mill." Barbara Garro shared a poem she read at a friend's funeral, "Lost Day," then the commentary, "Social Schizophrenia." Tracy read from the work of Leroy Watts, whoever that may be. Sally Rhoades closed out the night with "I Contain Multitudes" in which she proclaims she is more Walt than Emity, then proved it with a poem (& a nod to Mike Burke's poetry) in which she pondered what if her father were a poet.

A long & dusty road, crowded with many fine local poets, what the Caffe Lena open mic is about every 1st Wednesday of the month, starting about 7:30PM for $3.00. If you don't know where/what Caffe Lena is, Google it.
Posted by DWx at 9:38 AM