Tonight, much to the chagrin of the official Slam bartender Kim, we were upstairs at Valentines to make room for a band in the usual poets' spot. We were just as funky & even louder to carry our voices over the sound of electric guitars & drums.

There was a respectably outrageous selection of poets signed up for the open mic, with Jess Listen to my Words, Leslie Michelle, Bless, D. Alexander Holiday, & Mojavi (riffing off "Moody's Mood for Love"). 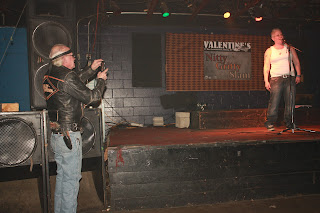 But notable performances for the night were Shannon (In the Money) Shoemaker's newest piece, her advice for Slam competitors to "Whip it out", be that a strap-on or the real thing, & later in the second round, Elizag's piece that takes a slice from her memoir of helping a family to raise triplet boys in North Philadelphia, Walk With Us.