The second Sunday at 2 reading at the Arts Center of the Capital District in Troy, NY, with tag-team hosts Nancy Klepsch & me, Dan Wilcox. It was an eclectic mix of writers (which, of course, was the intent when the Arts Center started this open mic).

First one up was Bob Sharkey who said he had finished last year's poem-a-day assignment, now on to a word-a-day, & so into "Another Deposition," then to a piece about a confrontation at a party, "Benefit" (in honor of New York photographer Bill Cunningham) , then "Doctor Doctor." Carolee was back after an absence with a new poem, "Crows on the 1st Cold Night of February," then what I think is a first, read one of her Blog posts, "The Sun Mother-Fucker." 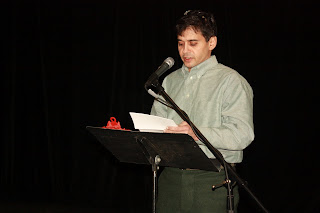 Harvey Havel, who as a prose writer does not read out much, read a thoughtful piece on a black man dressed as a Muslim un-codes the world & helps a white, Christian drunk. Tim Verhaegen plumbed the depths of his family relationships to analyze why he hates abused victims memoirs, & left us laughing. 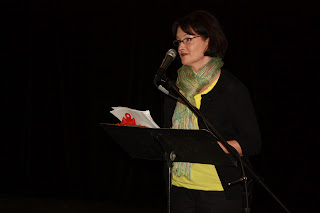 Casey Wald was a first-timer here & read an ironically touching memoir of phone calls from bill collectors for a debt from her deceased son. Of course February is Black History Month & D. Alexander Holiday was here, as he said, to represent, with "Little Brown Baby" by Paul Lawrence Dunbar & another poem on Bessie Smith, then his own poem "Monsters" from his latest book Emails from Satan's Daughter (Xlibris), stretching his 5 minutes to 12. To celebrate the birthday of Charles Darwin, Howard Kogan read 2 pieces on a theme, first "God's Regrets" (i.e. "why Man?" Of course, it was Mark Twain who noted that God created Man because he was "disapppointed in the monkey"), then pondering human insignificance, "Evolution." Ron Drummond (who often reads sci-fi fiction) presented a dramatic reading of an excerpt of his play set in England in 1576, with a young William Shakespeare.

David Wolcott returned to his memoir, today with a section about his big break into government energy policy during the Carter administration. Joe Krausman pondered the impact of cars on our psyches (& live) in his poem "The Wheeled God," then a poem about revival sauces & a Christian Mass & "Unanswered Prayers." A school teacher, my co-host Nancy Klepsch read a 6-word memoir she had written with her students, then one of her student's marvelous results, then to a work-in-progress, playing with repetition on the language of war. Heather Haskins read a prose selection, "Collusion," from a longer memoir, in which she meets her aunt's long-time abuser, a most uncomfortable tale. Brett Axel rounded out the afternoon with a sestina-in-progress, contrasting politics of the nation & of a household, then the hilarious "I Rule" from his book Rules (Minimal Responsibility Press, 2004).