Back at the Social Justice Center, a wonderful night of the voices of "regulars" & new voices too.

We began the reading invoking the night's muse, poet Bob Kaufman with a couple of his poems. Tonight's featured poet is frequently first on the sign-up sheet here, but instead in his place it was the closest possible morpheme match, Alan Casline, with a just-written poem about comparing local hotdogs, "Famous Lunch." A.C. Everson read the short poem "Wendy" from her self-published chapbook, Love A.C. Style.  Sylvia Barnard wrote about visiting a Cistercian monastery, "Execution." D. Alexander Holiday reprised his boisterous audience-participation piece, "The Poem is the Bomb" oh yes indeed! 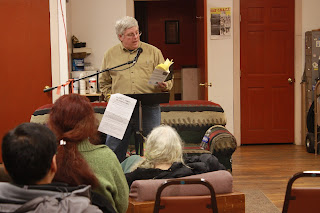 I've been a fan of Alan Catlin's work since before I moved back here 25 or so years ago, & he has read in the Third Thursday series previously, back in 1999 during Hurricane Floyd. He is also one of the most loyal of Third Thursday open mic poets, usually signing up #1. Tonight he read from his new book Alien Nation (March Street Press, 2011), which I had read it on a recent trip to Florida & the poems in it inspired the poem I read later after the break. But first he began with some recent poems, "My Dream Date with Frida Kahlo," a recent work from a series of "dream date" poems; then "Sex with Aliens" from a suggestion at the Caffe Lena open mic, & "The Health of the Sick". Describing Alien Nation as his "Jean-Paul Sartre No Exit collection" from his career as a bar tender, he read a generous selection from the 4 sections book, grim, chilling portraits of daytime as well as nighttime denizens lurking along mahogany ridge, more than enough for a lifetime.

After the break I read my poem "Arts Festival, Delray Beach," inspired by Alan's book. 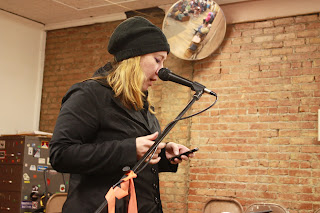 Laura Hartmark said she hadn't done this "in a long time," read a bop (cf. the work of Aafa Michael Weaver) based on the Billy Holiday song, "I Cover the Waterfront" for Valentine's Day. Another new face/voice up was Janastasia Whydra reading a poem she had workshopped for a class, a Winter blackout in Boston. Leslie Michelle has finally gotten her voice back, but instead of her own poem, read Pedro Petri's "January Hangover." Poetyc Visionz did his poem as Time & it is not on his new CD. Still another new voice was Sabrina who read an untitled piece with vivid images of a woman struggling for breath, for life. Mojavi was the last poet signed up for the night, with a love/sex & anger poem.