While some folks huffed & puffed in the Park in the annual Corporate Run, we gathered at the Social Justice Center to read & listen to poetry, with our featured poet, Mary Eliza Crane. To start, I invoked the Muse in the form of poet & activist Audre Lord, then into the open mic. With only a handful of poets there at start time (more arrived later) I allowed 2 poems (don't get any ideas for future readings!).

First up was Bob Sharkey with 2 sections from his long poem, "Discursive," the first a tale of catching squirrels, then a tribute to an old Buick. Joe Krausman pondered the philosophical/metaphysical with "Smart People Do Dumb Things." Michael Purcell was back after an absence, with a self-published book of poems (don't we all), & read from it "No Destination" & "The Original Sin" (the birth of money). Anthony Bernini's poem "The Dance of Dish & Glass" is a portrait of "an older woman who is dear to me," as he said. 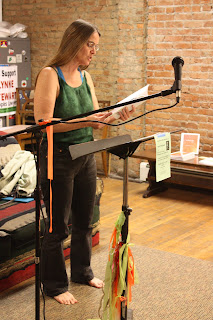 The featured poet, Mary Eliza Crane, has been traveling throughout upstate New York the last 3 weeks, reading her poems. I had caught her first reading early in the month at Caffè Lena  & this was her last reading before flying back to the Pacific Northwest. Her reading was pretty much what she had done at Caffe Lena, which was fine with me -- good to hear those poems again & new to the audience here. The weather was pleasant & she read barefoot & without the mic, poems of nature & her family.

After the break I read "What Really Happened" from Poeming the Prompt.  Brian J. Liston drove up from Saugerties to join us & read the multi-part "Mission" (about donating books to kids) & "Cracks" as useful to an author. Moses Kash III began with a long autobiographical introduction, then into his poem mentioning the attacks on Pakistan & Libya. Sylvia Barnard's poem, "Christopher Slaughterford" was about a 300 year old murder mystery in England. Jill Crammond brought us closer to today with a poem, "The Skin & Ribs Dog," about being bitten by a dog when she was 11, a lesson from her father. To conclude, "Screamer" read a poem about her sobriquet (turns out it is from a rock song she likes), filled with longing for the ocean & Asbury Park, then ended with more longing, for a younger boy, "Pillowhead."

10 open mic poets & a featured reader made for an enjoyable night of poetry, here at the Social Justice Center, 33 Central Ave., Albany, NY, third Thursday of each month, 7:30PM.
Posted by DWx at 6:09 PM