The Saint Poem Reading Series, May 16

This is a new series in only its 2nd month at the UAG Gallery on Lark St., hosted by Albany's perennial poetry entrepreneur, R.M. Engelhardt. This was the first one I was able to get to, & I got there late as well. I missed the first round of open mic poets & the featured poet, Steven Minchin, was just getting going when I got there. He had done the right thing, packing the audience with his friends, & everyone except me seemed to have a beer. 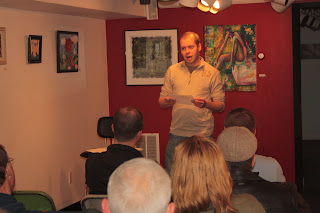 Steven Minchin is not someone who frequents the open mics in town so it was my first chance to hear his work. His titles are funny (i.e., quirky) word plays, such as "Cosmonauts Afraid of Foam in their Seats," "Blues Psalm 13 1/3" & "Duet Whispering Out," almost as if they were composed of random words. Many of his poems, such as "Grand Marshall We're Lost" & the Frank O'Hara/New York City -inspired poem "This Radiant Boy" dealt with gay passion & love, & he gave us his version of his biographical introduction in the long, whimsical Biolab 111.

After a smoke break Rob brought those of us that was left back with ee cummings' poem "somewhere i have never travelled,gladly beyond…" Bless recited 2 pieces, the pondering of beginnings & ends & Faith in the poem "Death" & a poem he wrote in his teen-age years for a hooker at Hunts Point. I selflessly promoted my new chapbook, Poeming the Prompt, by reading "What Really Happened" & "The Lesson." 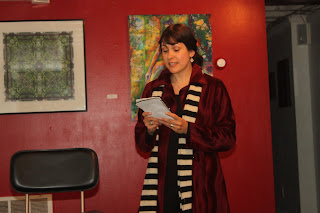 The photographer Lona Cygnus read an emotional piece, "Trink," as a tribute to the late gallery owner & artist Nadia Trinkala.

Rob gave us one more round, of one poem each, to finish out the night. Todd Fabozzi read "The Other America" from the copy of his book Crossroads that he was giving to Rob. Late arrival Lisa Powell Graham read a long, rambling piece she called her "woman's anthem" that can be found on her Facebook Notes. KJ (aka Keith) Spencer also read from his smart-phone, the poem "Muse." Bless talked about his days with the Soul Kitchen reading series, & recited "Uninspired." I read "Poeming" from my chapbook. Steve Minchin did more of his word play, a poem containing phrases such as "skin flinch turns". & Rob ended with his own poem defining "Truth."

This new series continues on the 3rd Monday of each month at the UAG Gallery on Lark St. in Albany, 7:30 sign-up, 8:00 PM start, with a featured poet & an open mic, hosted by RM Engelhardt.
Posted by DWx at 3:35 PM

Thanx for coming out & attending, sharing your work with us Dan. Was a good night of poetry for poetry's sake as I call it. Our feature next month on Monday, June 20th is none other than Mr. Avery Stempel. Hope that you as well as all poets (old scene & new)will join us at the UAG.
We hope to be presenting many more new poets & writers in the future.