I got to the bar at Valentine's somewhere between 7:30 & 8:00 & there were already 5 people signed up, so I knew this was going to be a different night than all the others. While waiting to start, el presidente, Thom Francis, our MC/host, was lamenting the loss of one of his more memorable poems, "Paper Messiah," that he couldn't find a copy anywhere, that he had never typed it up. Then when he got up to the mic, lo & behold, there was the poem in his trusty pocket notebook -- a good piece about poets & personalities & attitudes.

Mojavi took the stage next, & one of his entourage said he was a "Blackberry poet," of course referring to the electronic device he was reading from. But it called to mind the old expression "the blacker the berry, the sweeter the juice." His first poem, "State of Education" is posted on the AlbanyPoets.com website, then he read the lonely, sex & longing poem, "I've Kept it Hidden from You." 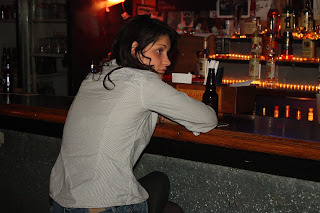 Chris Arquiett also read from a hand-held electronic device, but the poems were not his, but those of his companion at the bar, Kerry Giangrande. Both poems were untitled (or the titles not read), the first Mojavi described as a "sexy-ass poem," the second described her feelings when hearing that Osama bin Ladin had been killed. Chris did a good job in reading his friend's poems, but maybe the next time Kerry will read her own work. 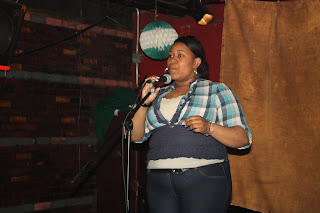 Another new face & voice, Allyson Cobbins recited her poem about what she puts on when she goes out, "Shades." Keith Spencer was still another poet reading from his machine, first "The Lion Sleeps," which got some of us at the bar singing "a-wimoweh-a-wimoweh…", then an untitled piece with the classic he/she back & forth. 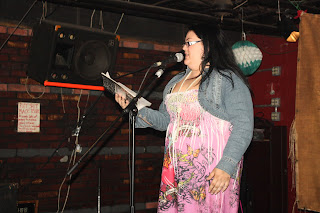 Next up was Jessica Layton, reading old-school style from a composition notebook, first "Imtimacy" about taking your time with love, then a poem about struggle & choice, "Present." I was up next, promoting my new chapbook from A.P.D. (also publishes dirt) Poeming the Prompt, by reading "Poeming" & "Looking for Cougars." Then Thom Francis was back with a something he said he forgot he wrote, "I Am Not Skinner's Box."

& finally, apologies to Gary Murrow who apparently read while I was in the Men's room & I missed his reading. Maybe the next time.

could you possibly link my name to my blog? http://kerrygiangrande.blogspot.com/
that would be really wonderful. if it's too much trouble, don't worry.