This is a series that I co-host with Nancy Klepsch at the Arts Center of the Capital Region on River St. in Troy, NY, so of course I'm only going to say great things about it, but then that's not difficult because so many fine local writers show up.

Speaking of which, Jil Hanifan was up first with 2 crow poems, "Wheatfields with Crows" (after the Van Gogh painting), & the list poem, "Lies about the Crow." I actually signed up #2, read the "Top Tips for Anxiety-Free Writing from Prompts" from my new chapbook, Poeming the Prompt (A.P.D.), then the new poem "At the Center." 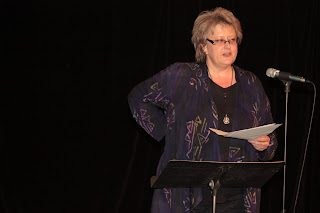 Kate Laity has been a fixture here since this series began & announced she will be in Ireland next year on a Fullbright grant; tantalizingly, she read about half of her story, "A Case of Dead Faces," where the main character meets the Buddha on a bus. David Wolcott's memoir of working on a horse ranch in Colorado when he was 19, & it's graphic images of horses mating got a rowdy response from the audience, oh yeah. Howard Kogan said he had been watching too much CNN so his poem "In News Closer to Home" imagined tribal warfare in the NYC boros & spreading to the small towns of Western Massachusetts, then "Folk Singer at the Senior Center" paid homage to singer Marilyn Miller, & he dedicated his moving poem "American Exports" to me & my peace-work (thank you Howard!).

Stephen W. Leslie read a couple of pieces that had been great hits at WordFest "Ornamental Cherry Tree" & the hysterical haibun "The Omega Retreat," then the equally amusing hippy tale "Did You Drop Something" (also a haibun). Ron Drummond began with an excerpt from a weblog entry on an essay by science-fiction writer William Gibson, then the opening scene of a novel-in-progress, an eating scene that grossed me out. 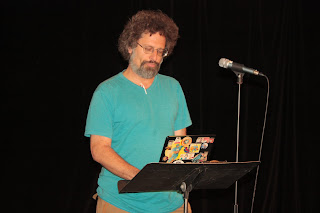 Barry Goldman read from his netbook (which Nancy pointed out was a first for this series), "The Possum," a poem based upon another poem by Richard Eberhart, then some reflections on the flood-tide of the Hudson around Troy, & ended with a short urban poem about flowers growing at the entrance to a subway station. Elizabeth Gordon, who had read so movingly in the Memoir Project, read 3 poems, the first about fishing with her father, then a piercing poem "The Professor" (who claimed to have no childhood trauma), & then from a series of poems in praise of the months of the year, "In April & May Gratitude." Nancy Klepsch ended the afternoon with "a bee poem" written this morning, responding to her allergies.

This reading, open to both prose & poetry, is held on the second Sunday of most months (we are taking July & August off), at the Arts Center in Troy. It's free & it's fun.
Posted by DWx at 8:27 AM

I am always keen to tantalise! Thanks for the great write up, Dan.