Back to Saratoga Springs in the Spring, ahh. Another fresh gathering of local poets & tonight's featured poet, Mary Eliza Crane.

But first the open mic, which our host Carol Graser led off with a poem from the anthology Listen Up! Bob Preuss began with "Spiral Bouquet," a poem in response to one of Sarah Craig's poems, then a long, rambling discourse on the Davidson sisters, a couple of 19th century poets who lived in Saratoga. I was up next to promote my new chapbook, Poeming the Prompt (A.P.D.), by reading "What Really Happened" & "Looking for Cougars" (which somehow I always associate with bars in Saratoga).

Barbara Garro added a touch of the bizarre, first by leaving a gigantic can of caramel sauce for the taking, then by performing 2 poems while wearing tap shoes, "Living Off Rhythm & Rhyme" & "The King's Cups" both with the same stomping accompaniment. Hamilton made a brief appearance with a short automatic-writing poem. 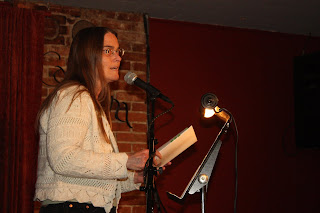 Mary Eliza Crane has ties to the Northeast but now lives in the Pacific Northwest. She read a mix of poems from her 2 poetry chapbooks, What I Can Hold in My Hands (2009) & At First Light (2011), both from Gazoobi Tales Publishing, as well as other poems. Interestingly, she read her poems without any introductory remarks, letting the poems stand for themselves, & without reading the titles. This was fine, since her poems are simply stated & direct, with images from nature & everyday life. She began with her family history in "Irish Wake" & returned with other poems about her father, "My Father's Sweater," "Flashback," & another that began "I buried my father down by the river…" Most of her poems were set outdoors in the natural world, such as "The Axe," "Frozen Wetland," "Hunger," & the compelling "Naked in the Rain." A peaceful reading, sort of like her beloved forest.

After a break, Carol Graser read an excerpt from her poem "Dear One," from her collection The Wild Twist of Their Stems (Foot HIlls Publishing, 2007). Steve Pillar had read here last year, was back with a couple pieces in rhyme, "Oh LIttle Child" & "An Encounter." Kate's 2 poems were short & poignant, the second, "Why Can't We Stay Here?" about trying to avoid death. 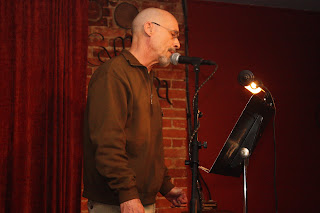 Charles Watts' first poem was in the persona of a WWII American interred in Japan, in Nagasaki, & "Alone in the Dark Behind the Garage," written 2 days ago, has him looking at the stars. W.D. Clarke's 2 short rhymes were both funny, "The Other Grandma" using a chamber pot as a serving dish, & "The Sign on the Tent" was about paying the consequences of the 2nd bowl of chili.

Tracy Oatfield read an excerpt from the the Persian mystical book, The Seven Valleys. Kevin Peterson's first poem was a haiku about french fries that he just wrote at dinner, while his longer poem, "Deviant Behavior" took place in a classroom as the world burns. Gordon Haymon was the last poet for the night with a descriptive memoir in rhyme of "Third Beach Creek," & then a poem about an auction.

Poetry is alive & well, including in Saratoga Springs, thanks to Carol here at the historic Caffè Lena, 1st Wednesday of each month, 7:30PM, $3.00.
Posted by DWx at 2:32 PM