The last of the season's readings was quite a performance by Ed Sanders. Before the evening event in the University at Albany's Campus Center Assembly Hall, Sanders held an informal seminar in the Standish Room of the Science Library. 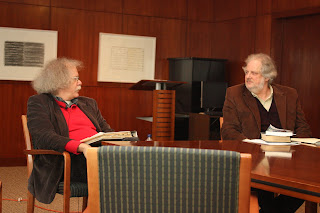 Writers Institute Director Donald Faulkner led off the discussion which was followed by a number of questions from the audience. Sanders talked about his study of classical Greek at NYU, life in the East Village in the 1960s, the Peace Eye Bookstore & Fuck You: a Magazine of the Arts, his friendships with Allen Ginsberg & with Charles Olson, & his project to write the history of the United States in verse (he has completed the 20th Century & is currently working on the 19th Century). Other questions led him to a discussion of "investigative poetry," & of his writing of The Family, the story of Charles Manson & his cult.

Later in the Assembly Hall Sanders did a performance that paid tribute to his heroes, but first he addressed the issue of writers self-publishing their own works, citing the examples of William Blake, Walt Whitman, Wood Guthrie, Allen Ginsberg, & even Anton Chekov, & Jane Austen (this thrilled me because I had in my bag copies of my own self-published chapbook, Poeming the Prompt, just published the week before).

Sanders paid tribute to Albany-native Herman Melville by performing his update of the story of Bartleby the Scrivener, in Sanders' version the tale of a poet in Brooklyn who has to work 4 jobs in order to survive. He read & sang, complete with cackles, accompanying himself on his lyre.

The poet Robert Creeley was remembered at a college reading in the piece, "Creeley as Therapy" which can be found in Let's Not Keep Fighting the Trojan War (Coffee House Press, 2009). 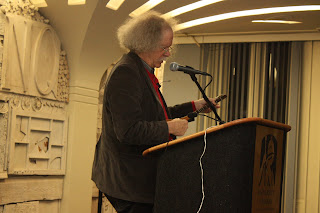 The beautiful & tender tribute to Charles Olson, "Hymn to O," incorporated a refrain from Olson's own Maximus Poems, "I set out now in a box upon the sea."

For Allen Ginsberg, Sanders read from Let's Not Keep Fighting the Trojan War "Live Free or Die" & the anecdote "Ginsberg in India," then sang the tribute, "He was one of my heroes… the River of Freedom flows…"

Finally, after all these tender tributes, he ended his performance with the most tender of all, a poem to his wife Miriam. He said that Miriam encourages him not to be such a workaholic beatnik, so his poem celebrated "homo ludens" (playful humans) & Miriam going out on the lawn in "her loose peace-gown" to dance the polka.

It was a marvelous performance, a tribute not only to Ed Sanders' heroes, but to Ed himself & his life as a "homo ludens." There is more to come.
Posted by DWx at 4:39 PM

he's too odd to get acclaim, i guess, i mean in the scholarly fashion, unlike some of his beatnik associates