& a wild night it was, a week early (this is usually held on the last Monday of the month) due to the Memorial Day holiday next week, but more so (perhaps) so we could all celebrate Mary Panza's birthday (it was Avery's birthday as well) -- she was the host. So we once again gathered in the backroom of McGeary's for food, drinks, words, cared for so well by the ever-patient, ever-tolerate Meghan.

No featured poet tonight, just an "old-school" open mic.  Sylvia Barnard started off with a poem inspired (prompted) by Carolee's encouragement to write about her "ex-," the father of her daughter, so she read "Books" (on his remarking that Sylvia could not be a good mother because she had too many books!).

I'm sorry if this is sounding as repetitious as it is, but I read (yet again) from Poeming the Prompt, tonight the poems "Prophylactic" & "Looking for Cougars" (there is a connection there).  I had made the mistake of giving Mary Panza her birthday gift before I read so there was so much commotion & to-do about it that I almost didn't get to read my poem, but Carolee Sherwood settled us down with a found poem, "Boy Toy Brad" reading from the back of the box of the gift (while one of Mary's friends at the bar was blowing up for her), then she continued with her poem from Albany's Tulip Festival, "Do Not Be Startled" (read from her iPad). Don Levy, catching his breath over the blowup doll, read an old poem from his rare chapbook Super Queer Poet Saves the Day! "Hard at Work on the Tiger Beat" (on the movie "The Breakfast Club"). 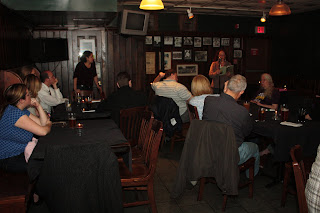 Tess Lecuyer paid tribute to one of Albany's finest poets (& thrilled me to no end) by reading poems by Harry Staley, "Biology 1" & the percussive "The Senile General in the Garden." Jill Crammond (whose hair was perfect) responded to Don's remark that she was a "side-kick" with the super-hero poem "Wonder Woman Returns to the Passenger Seat Lets Cat Woman Take the Wheel."

It was at this point that Brad returned to the room, fully inflated & (alas!) less than as hyped on the box, at which point the battery failed on my camera. Needless to say, there was much ado about nothing (or at least air & some surrounding plastic).  (The photo is by Carolee Sherwood, & shows the birthday boy & girl with Brad.)

Like I said, it was also Avery's birthday & he helped pack the house with his entourage to hear him read his birthday poem, "Where Did the Time Go?" & the confessional "Tequila & I Watch a Movie." His friend Adam Blythe was up next with creepy poems, one for his Mom about fighting Ninjas (I wonder if she believes him?), & another about sleeping with a dead body.

Jessica Layton's poems brought us back to more normal relations, reciting from memory an untitled piece about "almost walking away" & a poem about mutual love, "I Need That." Leslie Michelle also did poems about love, the just written "Losing You," & "Dreaming with You."

Our host, Mary Panza, introduced the night's last poet as "Host of the Universe." Not quite, but R.M. Engelhardt does host poetry readings at the Fuze Box (Vox) & at the UAG Gallery (Saint Poem); he read a long, whining rant supposedly referencing the recent non-Rapture titled "The Rain Poets," & about "All their poems that never change," that sounded like other such poems he's written. You can read this latest version on his website.

Most months of the year Poets Speak Loud! is on the last Monday of the month, 7:30PM sign-up, 8:00 PM start (but come early for dinner), at Mc Geary's, Clinton Square, Albany, NY. Sponsored by AlbanyPoets.com.
Posted by DWx at 9:18 AM

Actually Dan?
The rant was a real poem & the poem was about whining rants. Try and get it correct. It also speaks about the lack of substance in poetry these days and what should "really" matter-what we have lost. Which is, a purpose and way of reaching people and making them think. Pity that's missing. Perhaps if you actually knew what you were talking about (y'know, poetry-styles-kinds etc etc literature etc)or listening you'd of known the difference. Nice try at once again however trying to mock and or knock down anyone who doesn't or refuses to conform to your self made scenery though. Hmmm... perhaps you should cover comedy nights instead if you don't get the references in poetry or understand what the poets are saying. Oh well. Doesn't really matter on here.

But hey, anybody that wants to read my work or actually realize more and or see thru this guy's agenda or media spin? Go to:

Oh, and another thing. You're a writer? If you're going to use someone's name or write things about them? It helps to correctly spell their last name.

Sorry, I apologize (& correct) any mis-spellings.

pity you can't afford one.