& the annual return of Sanity Clause, with gifts of poetry for all the bad poets. Tonight’s featured poet was Kate McNairy. I invoked the Muse of the gone poet Enid Dame & once-again this year read her moving “Holiday Poem” with it’s right-on conclusion, “We don’t need the solace of bought objects/ We Need each other’s light.”

It was a good night for Sanity Clause, with the major portion of the readers being women, to sit on his lap & recite the tales of their naughtiness during the year. The first was Sylvia Barnard with a work-in-progress about a village outside Cambridge, England, “Grandchester, to Rupert Brooke & Sylvia Plath.” 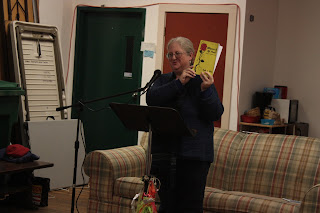 At her first appearance here at the Social Justice Center, Cindy Blair read her one holiday poem, “Forget Santa,” a memoir poem of childhood. A poet known in the past by other names showed up tonight as Ricki DeSeers & had a stack of books he recommended & a ramble on the times,  then recited by heart “50 Cents,” a Depression era piece. Sally Rhoades was another welcome female for Sanity Clause’s lap, but first read she a poem on h(om)e coming in a canoe. Avery read/chanted “What Is that Subtle Background Buzz” a piece based on the Heart Sutra. 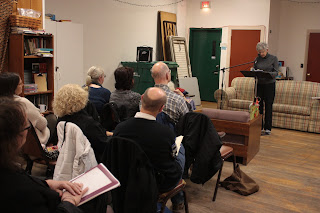 Kate McNairy’s book June Bug was published in 2014 by Finishing Line Press & tonight she read the whole thing. The poems include many nature titled pieces, “Strawberries,” “Crows,” the title piece “June Bug,” “Rainbow Trout,” etc., with even references to herself in a couple poems as a skittish rabbit. Some are quirky philosophical ponderings, for example “Gambler,” & “Architect” sometimes with a dash of the sexy. Then she read a sample of some newer work, ranging from pieces on loneliness (“Homeless,” “A Cup of Coffee”), to a love poem “Love All Swept Up,” a piece set in a bar “Pool at 3 AM,” & a poem on “Smells,” among others. Her poems are characteristically short, imagistic, which she read with nary an introduction. You can often catch Kate at the Caffè Lena open mic in Saratoga Springs.

After a break I read my traditional holiday poem “Christmas Eve, 1945.” 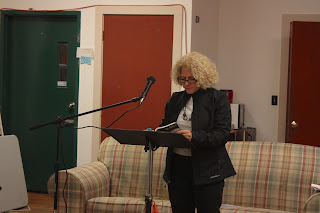 I was followed by Donna Williams, who didn't read a poem of her own but brought one by Galway Kinnell just so she could sit on Sanity Clause’s lap. Karen Fabiane was back to read a new poem, “Andalusian Girls” filled with swirling, urban images of heroines. Eric Randall made a rare appearance with a poem titled “Writing Lesson” describing a poem & love. Down to the final 3, Julie Lomoe plugged her mystery novels then sang the parody “The Most Over-Hyped Time of the Year.” Carole Rossi wasn’t sure which last name to use, ending up with a palimpsest on the sign-up sheet, & read a poem from a series “120 Nights of Dreaming,” last night’s dream “The Dreamland Parable” from her inner-child to ours. The last poet of the night, Adam Graydon Brown, read a brief self-help poem to close out the night.

Sanity Clause was most grateful for all the women poets who showed up tonight to read — & more importantly, to sit on his lap. Sanity Clause only shows up once each year, but this series with a featured reader & an open mic happens each third Thursday of the month at the Social Justice Center, 33 Central Ave., Albany, NY, at 7:30 PM, all for a modest donation to support the featured poet, the SJC & other poetry events in the area.