Live from the Living Room, December 9


Although Don Levy has announced that this poetry/open mic series at the Pride Center, that has been going on since February 2003, will be ending, it’s not quite yet! Tonight a number of poets & friends gathered to hear Sylvia Barnard read her poetry. 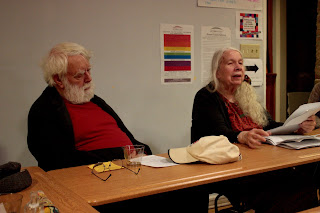 Sylvia is a regular here, & at a number of other venues in the area. Tonight she read from a crumpled sheaf of poems representing poems written in the last few years, beginning with poems about her neighborhood. “Neighborhood 2015” (about looking at the windows & buildings along Willett St., imagining the people who lived there in the past), & the “Siobhan in Washington Park Age 46” was a recent piece about her daughter. Staying in Washington Park for a while, she read “Playground” & the wonderful meditation on aging “Poets in the Park.” Then on to some poems about friends, “Schubert in Assisted Living” & 3 poems inspired by tales told by a Danish friend, “Cycling thru Denmark,” “Dickens in Denmark,” & “Occupation,” all set around World War II. She read a series of poems set in England & Ireland, “Liverpool,” “The Book of Kells,” & ”The Giants’ Causeway,” then ended with one about a trip to Sicily, “Wind.” Sylvia began her reading by tentatively apologizing for reading poems that many of us had heard before, but that, for me, is never a problem if the poems are good — until I can go to the Library & take out the Collected Poems of Sylvia Barnard, I’m happy to hear again poems I have enjoyed in the past.

A brief open mic followed, & I was first on the list with a new, tribute poem “Joe the Bartender” then an somewhat older love poem “The Noon Train.” 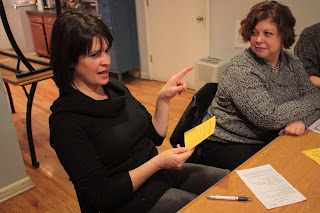 Meredith was not going to read, then remembered she had written an Haiku this morning & read that, & glad she did. Sally Rhoades had forgotten her printed poems but read 2 from her phone, “This One Night I Awaken” (to Moon light) & “I Am a Dreamer.” Ford McLain had been the featured poet here last month (which I missed), but he was back tonight with a Haiku, then an anaphoric poem on writing “Moleskin.” Our pleased host, Don Levy, read 2 poems inspired by recent events, “The Faces of Paris” in which he recalled the French people he had seen on his visit there in August, & a poem about a recent front page of the Daily News “Thoughts & Prayers.”

For the time-being there is a poetry reading with a featured poet & an open mic at the Pride Center on Hudson Ave., Albany, NY on the 2nd Wednesday of each month, 7:30PM, with a modest donation.  Catch it before it is gone.