Nancy Klepsch & I were pleased to see so many smiling, poetic faces in the black box theater at the Arts Center this Sunday afternoon.

First up to read was Peggy LeGee with the first of the afternoon's seasonal poems “I Give the Gift” in many forms, for many reasons. Carol Jewell had an afternoon out for poetry & began with “The Snowman” by Wallace Stevens, then her own touching poem about meeting her dead brother “Chance Encounter.” 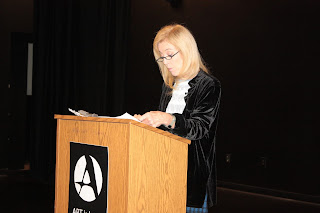 Maureen McCauley was here for the first time with an excerpt from a prose memoir, this section “In the May Queen’s Court” set in 2nd grand in Catholic school. Bob Sharkey gave us a brief update on The Stephen A. DiBiase Poetry Prize, a poetry contest he is coordinating, now gone international, then read “The Red Chair,” a series of poetic vignettes, watching DVDs with children, listening to Hummel’s music, & being in Union Square. Cathy Abbott, as always, read a very brief piece that, like Haiku, are best heard a 2nd time. I had signed up too & read my poem about my mother’s Xmas, “Christmas 1945” then a brief, new piece “Dream Poem.” Jay Renzi read what he described as the last part of a 9-part long poem titled “The White Goddess” this part was “Runes & Mountains,” a Dark Ages fantasy, then the short “Sexy Trouble.” 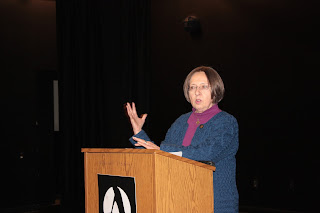 Sandra Rouse read a not-so-nice seasonal piece “Bile at Christmas” then “Gold Finch” from a series of poems about birds, confronting her fears. Joe Krausman’s seasonal poem was “Season’s Greetings” to all the faiths, then read a poem from his brand-new chapbook from Benevolent Bird Press, Monkeyshines, the poem “Out of the Running” which, he said, was printed without the final quatrain, which he did read for us. Mike Conner began with “Love Feast” then his version of that famous poem first published in Troy, NY, his titled “The Night Before Christmas at My House.”

Then Nancy & I read the excerpt from Enid Dame’s “Holiday Poem” that we have used as a flyer this time a year at the monthly peace vigil in front of the State Capitol in Albany.

We’ll be back next year on the 2nd Sunday @ 2PM at the Arts Center in Troy, bring poetry or prose to read. Enjoy the Holidays (& avoid the Krampus — & cramps).
Posted by DWx at 10:00 PM