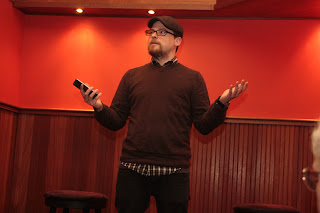 This was the first in a planned series hosted by Thom Francis, el presidente of AlbanyPoets.com, to be held at the Midtown Tap & Tea Room on New Scotland Ave., Albany, NY. Thom said it has been his dream to have such a series where each night is focused on a single local poet, with a reading & then an interview & Q&A to discuss the poet’s work in depth.

It was most appropriate that the first poet to undergo this regime would be Schenectady poet Alan Catlin, one of the most published poets in America & a regular, loyal supporter/participant of the local poetry scene. Even before I moved back to this area in 1986 I knew the name Alan Catlin from numerous small press zines & from Factsheet Five, a periodical directory of zines published by Mike Gunderloy out of Rensselaer. It contained reviews & contact information for the zines that was important for connecting us like-minded poets & artists, & for finding places to publish our work. I recall one issue where they published the results of a survey they had done of the zines & listed "the most published poets in America."  The list included at the top Lyn Lifshin (who was living in Niskayuna at the time), Paul Weinman (Albany) & Alan Catlin of Schenectady. I won’t say that’s what made me decide to move back to Albany, but it certainly made my move from the NYC metropolitan area sweeter.  After I moved here I was pleased to actually meet Alan, then, over the years, become his friend, trading poetry books, sharing stories on car rides between poetry readings & Schenectady. 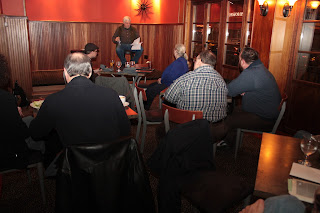 Alan's reading tonight mixed poems from his newest book Last Man Standing (Lummox Press, 2015), from a new series based on movie titles “Hollyweird,” & some from a forthcoming book of ekphrastic poems based on photos. Last Man Standing features a cover painting by Gene McCormick which could be Alan (although not with a bowtie) in his job as a bartender for many years, notably at Albany’s Washington Tavern. So many poems from this collection (& others) come out of that cornucopia of experience. Alan’s interest in the visual arts has also fueled many poems & his new collection will include poems on work by Mapplethrope, Groz, Sandor, even Ralph Stedman. 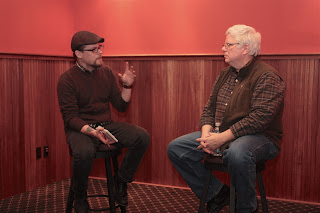 Following the reading Thom Francis sat down with Alan to discuss his work. The topics of that & the audience Q&A ranged from Alan’s own writing, to Last Man Standing, to his editing the online journal Misfit Magazine, to his relationships with poets Paul Weinman & Lyn Lifshin.

As is AlbanyPoets technical wont, the program was audio-taped & hopefully will be available to the world sometime soon so you don’t have to take my word for what happened tonight. & speaking of AlbanyPoets, check out their website for future Albany Poets Presents! programs, as well as other poetry events in the Capital region.
Posted by DWx at 10:44 PM