But nobody is louder than our host, Mary Panza, even with a mouthful of Pop Rocks tonight — which also was a night of virgins, or a few anyways. 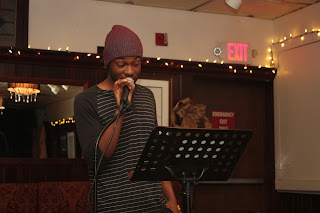 First up in the open mic was Ian Macks with a poem titled “Tightropes” based on the free-flow of ideas listening to music, then a relationship poem with thoughts of friends who had been mugged. Joe Krausman’s first poem was titled “Too Old” which of course engendered some gentle heckling from the crowd, then a poem about a true encounter “At the Dollar Bargain Store.” Julie Lomoe read 2 seasonal poems about skiing, the descriptive “First Skiing of the Season,” then what happened on a “Frozen Chair Lift.” 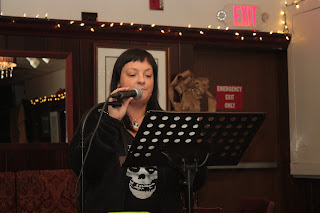 First of the night’s virgins was Rose with a good-ole break-up poem titled “29 Years.” She was followed by Adam Tedesco, who read from what he called “a shit-load of poems about my heart,” a cluster of short pieces, images, similes of the heart. Tim Livingston read a love song titled “Tracks” that will be on the new CD, Hold That Thought Forever, from the band The Last Conspirators, coming out in January. 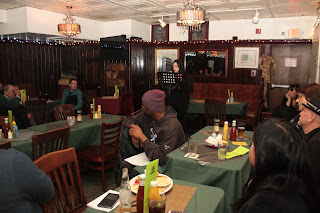 Even tonight’s featured poet, J.L. Weeks, was a virgin of sorts: this was her first featured reading. She began with an urban piece about the “hard city,” then on to another, “Tuesday” sitting at a bar in NYC. “Walter” was a sad portrait of a man at the VA hospital, while “Welcome to Bullshit Industries” was structured like an automated phone service menu, but got a little lost in its politics. “Elements” was all about breathing them in. She said that “Ballad of a Hollow Girl” was her “opera,” about a girl taking guys home & the end of relationships, in uneven rhymes, as were many of her pieces. Her final, long piece was a self-portrait, using writing as healing, “It Comes in Lines.” Jamie hasn’t read out in the open mics very often & I hope she does so we can watch her work mature through her exposure to the varied work of other poets.

Back to the open mic, Nykky was another virgin, but said she was reading from her 2nd book, a grim piece about being stalked, “Shadows.” Jacky read in 2 parts, the first about her father, the second about her mother, both in every poem she writes she said. 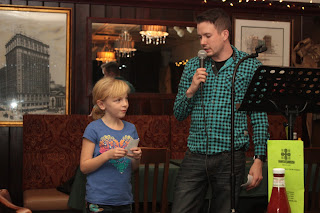 The most charming reading of the night was by an interview of Samson Dikeman by Magnolia,  tossing the pages of their script to the floor as they finished each line. I read 2 new poems, the tribute poem “Joe the Bartender” & the shorter “Metaphor.” Carrie Czwakiel began with a poem written when she was 17 years old, “Smoke,” then what she called her “forgiveness poem” to her ex, “Husband, Father & the Drunkard.” Karen Fabiane began with “The Rain Came” from her first book Seeing You Again (Grey Book Press, 2014), then a new piece “Andalusian Girls.” Avery was the last poet of the night, first with a new piece written today, the characteristically effusive “Extreme Ideological Expulsion,” then to the extended sex metaphor of “You Are Art” — hey, aren’t we all?

Poets Speak Loud! is a production of AlbanyPoets.com (where you can find a calendar of the region’s poetry events) & takes place on the last Monday of each month at McGeary’s on Clinton Square, 7:30 or 8:00, donations accepted to pay the feature & support the cause — good food, cold drinks, hot wait staff — poifect!
Posted by DWx at 9:20 PM