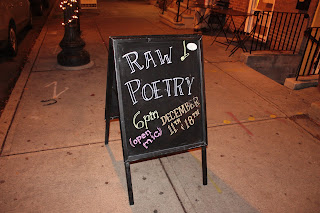 This is a brand-new series that I literally stumbled across the other day doing some Xmas shopping  at Elissa Halloran’s on Lark St. There was one of those sidewalk signs that announced “Raw Poetry, 6PM, Dec. 11 & 18” outside The Brakes Restaurant. So I came back the next night to check it out. In the meantime I looked on AlbanyPoets.com & it was listed in the calendar at 7PM, so I went at the earlier time. The Brakes is a coffeehouse & vegan restaurant on the 2nd floor of 227 Lark St., Albany, NY.

It was a good sign when I walked in & got my cappuccino (with almond milk) that they were playing a recording of The Last Poets album. The organizer, Hyacinth Miles, who is also a cook at the restaurant, told me that this was actually the first such reading & that they are planning to hold it every Friday night, except on the 1st Friday of the month when there is the art walk along Lark St. & in Albany. She said that indeed there had been confusion over the start time & some folks would be there later, but in deference to a few of us who were here early they would start soon after 6:00. 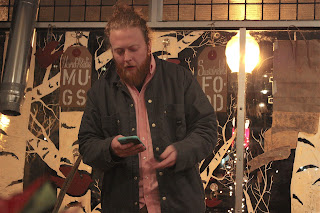 First of the first was “King Charles,” with 3 pieces (Hyacinth said we could do 8 minutes), a piece addressed to a “you” who it seems was a building as old as he is, then some musings on love, & a spiritual piece about learning to be compassionate addressed to another “you” who was apparently a god of sorts. He later said he was new in town, had done Slam back in Michigan where he was from. Hyacinth Miles did a love poem titled “We Were Violence.” I was up next, talked briefly about the Albany poetry scene & read, by way of history, “Where Were the Professors?”, then “The Cold Clean Sea” from my new book Gloucester Notes, & from Poeming the Prompt the poem “What Really Happened.” Hyacinth was back with a hip-hop piece from memory that was performed at high speed, then a notebook poem about the end of love, & another from memory cursing the rain. 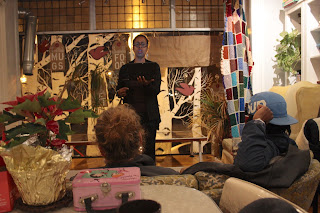 At this point we took a little break as more folk filed into the small room, including a few poets, then back to the open mic. I was surprised to see Druis Beasley arrive, a poet who had read earlier this year in May at the 2nd Sunday @ 2 open mic at the Arts Center in Troy, & who had been active in the early Albany poetry scene when she was a student at the University at Albany. It turns out that she is Hyacinth’s mother. She began with political rant “Against the War” on black history, racism, & the need for the light of the ancestors, then another piece on racism “Double Consciousness,” & on to a praise poem for the African mother goddess & what she called “women of the calabash.”

Lana Harvey read a piece titled “New York New York” from her phone, a political poem that sounded like it was based on Allen Ginsberg’s “America.” Isaiah Tinsley performed a dialogue piece from memory “Over the Moon” that he got us to sing along with at the end. King Charles was back again, since there were more people here & took advantage of the stage to do 2 pieces he hadn’t done before, the repeated 2 from his first set. 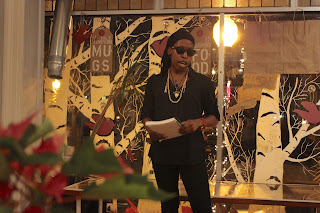 Hyacinth ended the night with a couple pieces, one titled “Unmarked Grave” & a repeat of her high-speed hip hop piece (for which she wears her dark glasses).

The Brakes is a funky coffeehouse setting with floor-to-ceiling windows facing out over Lark St. that serves vegan & gluten-free & local foods, & now poetry as well, at least on most Friday nights. I was told they would be starting at 7:00 PM from now on. Check it out for poetry, or any other time for the food, coffee, tea.
Posted by DWx at 7:47 PM