as we often do. & as usual on the Last Monday at McGeary's Mary Panza was the whip-cracking host. Before the featured poet, we dove into the open mic, a sea of poets tonight.

I started it off with an old poem, "Belle du Jour," that mentions Ted Adams, then on to the brand-new "Coyote III." Introduced by Mary Panza as "very black [in his attire] & very smelling good" Ed Rinaldi started off with a short day/night piece then into a poem about his ex, "Breakfast at Stravinksky's Bed of Nails." Dain Brammage read from his smart-phone his poems "Damage Control" & "One Good Day" (which he is saving, hour-by-hour, in a blue box). Don Levy read his 2 new memoir poems, "Newsprint" about his father, & "Homewreck" (home ec v. shop). Mojavi ("Lord of UGT" per Mary Panza) also read his poems from his phone, beginning with a bit of surrealism & revolution, "Unconcious Explosion Inspired by Fate," then with background music from a 2nd phone, a tender, love-lost poem about an ex. 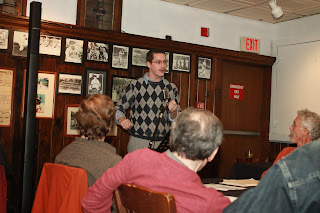 Kevin Peterson was the night's featured poet, with his new-grown mustache (actually, as friend once pointed out, one does not grow a mustache, one just doesn't stop it from growing), started by reciting Def-poetry performer Steve Connell's "Compromise." He continued in the same vein, this time a monologue to a lover, "Tonight is the Night," & a monologue, of sorts, "For the Twinds," half of whom were in the audience. Next he read a series of short, aphoristic pieces, not quiet haikus, on art, poetry, & fucking & drinking. Actually, fucking & drinking (or other drugs of choice) was the theme for the rest of the night's poems, memories of teen-age black-outs, his brother cooking crack, the traditional Wednesday-night before Thanksgiving partying, the sadness of "Saratoga on a Wednesday" after track season, STDs, to the cynical inventory of a hang-over diner breakfast with last night's not-so prize score. The conclusion of the pondering of the question of poems versus dancing & debauchery in "A Good Day" was to burn your poems (which at times has seemed the right choice to me too). While Kevin is a facile performer of his own (as well as others') poems, he was not well-prepared, having to ask the key question, "How am I doing on time?" (To which he received the time-honored standard response, "2 more.").

Described by our host as "a single girl in the big city," Carolee Sherwood read 2 sections from her November long poem, working through (what else?) relationships. Elizag recited a poem about memories of fishing with her father, then faltered (happens to us all) when trying to recall the companion, hunting poem (next time). Joe Krausman read a parable of "Good Government," then a poem contrasting the end of the world with the quotidian, "Panacea."

A new face & voice was Lou Rehder, with 4 haikus, then a portrait of a woman in his poem "Tower." Another new reader, Terry Rooney, read a grim, over-wrought poem "The Suburbs in Wartime." RM Englehardt unfortunately broke his reading glasses on the bus on the way down here, but persevered; he began with "See it Through" by early 20th Century poet Edgar A. Guest (bet you thought I was going to say Edgar A. Poe!), whose turgid style still exerts a lingering influence on young poets just starting out, then his own "Under the Hunger Moon," a response to the Occupy movement.

"Inspirational poet" Poetic Visionz was another having trouble remembering his poems tonight, ending "The Two of Us" too soon, then reverting to his signature piece "Upside Down Inside Out" when he couldn't bring up the poem he had wanted to perform (next time). 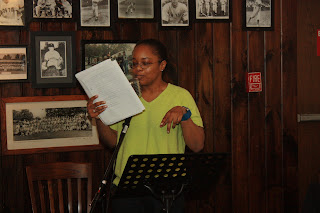 Leslie Michelle has no such trouble, reading her poems from her handwritten notebook; "He Loves to Hate Her" was written on the bus about someone who can't let go, then a list poem written coming here tonight about missing Summer -- ah yes, do we have to go through Winter again?

Come to McGeary's the last Monday of most months for this open mic sponsored by AlbanyPoets.com, 7:30PM. Good food, efficient service, cold beer, warm hearts.
Posted by DWx at 2:52 PM