Once again we gathered at the Old Songs Community Center in Voorheesville on a 4th Sunday for poetry. As the old song says, "… & the usual crowd was there" (& a few others). Mike Burke adeptly handled the duties as host with an insightful comment on each poet's reading.

Including mine, as I was first up in the open mic with an old poem that mentions our friend Ted Adams, "Belle du Jour," then a new piece, "Coyote III" in a series, & a poem for Dennis Sullivan, "That Apparition."  Dennis Sullivan himself followed me with 3 philosophical poems pondering words in one form or another, "Apology," then a poem to William Carlos Williams (that references Rimbaud as well) "Addressing my Mentor with a Question Mark," & the timely/literary "Occupying Ezra Pound." Joe Krausman's selections of poems required mnemonic devices, beginning with using fingers (as he cited the poet Michele Battiste) watching one's own death in "Requiem," then a recited poem using rhyme as a memory aide, then the 2-part "Poetry as Sex/Now they Have Babies" (cf. Paul Celan, "poetry is a handshake").

Howard Kogan sat with his cat waiting for "The Portal" predicted in the Mayan calendar, then found out what "way cool" was at a "CD Launch Party." Alan ("Bird") Casline was super-literary with a take on Wallace Steven's "The Snow Man" "Kenning the Cool Daddy-O," then a poem combining feathers & economics, "A Tour of Charles Olson's 'The Kingfisher'."  Obeeduid has been exploring the language of the Mohawks, his work informing his poems on the Onesquethaw, first the correct translation in "Sinking Stream Spirit," then "I've Had a Beautiful Dream" & more. Mike Burke poems were memoirs combined with present ruminations, "Long Ride" (remembering listening to Nixon's resignation speech while in a car with others who are now gone), & the sad portrait of his father in the poem "Headstone." 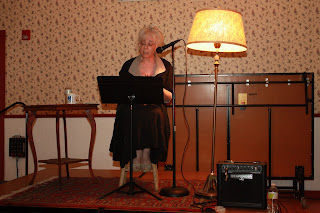 The featured poet was one of the usual hosts & organizers behind Sunday Four Poetry, Edie Abrams, whose reading fit that perfect model of a poetry reading: "leave us wanting more." She began with poems from a workshop she was in with Bernadette Mayer, then cited the "finger-prints of poetry" in "Through a Poet's Field." On to poems about her cats, then about her rhododendrons ("The Soul is the Soul of the Rhodi"), & a series of untitled poems rich in images of real life. Her long poem of a night-time vision of a white bear was haunting, while a poem on climate change in the Antarctic was actually funny in its grim strangeness. She ended with the a wry memory of her mother & grandmother & potatoes, "Good Night Garden."

This stellar event happens mostly on the 4th Sunday of the mont (but not always), at 3PM at the Old Songs Community Center in Voorheesville, NY for a modest donation that pays the featured poet & supports the work of Old Songs.  I love it.

(A brief note that the collection of poems from April's Smith's Tavern Poet Laureate Contest is now available from Square Circle Press. Buy now before they are all gone.)
Posted by DWx at 9:42 PM