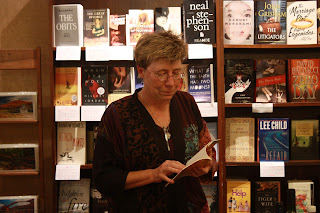 Jil Hanifan has been a long-time poet in the city of Albany, NY, her career going back to the readings at the QE2 when she was student; now she teaches writing & she was surrounded by her students & her many friends at the Book House of Stuyvesant Plaza this evening to sign copies of her book of poems, their agonizing speed (The Troy Book Makers). She also talked about the sources of the poems & read a tidy selection of the poems.

Arising from a week-long workshop at Pyramid Lake, the poems were inspired in part by the nature poems of Mary Oliver. Jil said she tried to use those poems as a framework to do nature poems in the city. Other influences were Louise Gluck's Wild Iris & Diane DiPrima's ongoing serial work Loba. The Mary Oliver influence shows up in the title poem, while Gluck's practice of giving voice to the flowers is in "coneflower." I've admired, as well, "old pears" which I've heard Jil read at open mics (& wrote down as "old pairs" for good reason). DiPrima's Loba is a wide-ranging exploration of the figure of the wolf-goddess (among myriad other topics); Hanifan's version uses the crow as totem, in "lies about the crow" & the longer piece "we crow."

Many of us have been waiting a long time (since the 1999 chapbook whethergirl: wind rose (TA 'WIL Books and Documents)) for another collection of Jil Hanifan's poetry & now here it is. Get thee to the Book House for your copy.
Posted by DWx at 3:51 PM