Live from the Living Room, December 14

Our cozy host, Don Levy, welcomed a tidy audience for the monthly open mic on the 2nd Wednesday -- & it really was, even if the third Thursday was the next day, ah the shifting calendar. 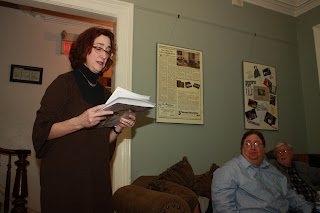 But first the featured poet, Barbara Ungar, read, not from her books, but all new work, still in typescript, beginning with the title poem, "Bashō Was a Ninja" on the secret lives of poets. But the title of the new collection isn't firmly set yet, so she read the other potential title poem, "I Feel Bad for Anne Boleyn" (Perhaps other titles she might consider could be "I Feel Bad for Bashō", or "Anne Boleyn Was a Ninja"). Then on to a poem about watching Brigadoon, & the ole professorial stand-by, "On a Student Paper Comparing Emily Dickinson to Lady Gaga." The poem "Rosh Hashanah 5771" celebrates the birthday of the universe. Dylan Thomas' villanelle "Do Not Go Gentle into that Good Night" is one of those poems (over)taught in schools, a bit over-blown & sententious, but Barbara's re-write for her father, "Against Dylan Thomas," softened the edges into something more human. Her final poem, "Things do not Look as Dismal as They Did" took its title from numbered messages for telegraph delivery & was an abcd poem based on a list of endangered species. I, for one, look forward to seeing these poems gathered into a book, whatever it's ultimate title.

Then, as is the custom here in the Living Room, we proceeded on to the open mic. I was first up with 2 recent poems inspired by the poetry of other local poets, "What the Deer Sees," & "That Apparition (for Dennis Sullivan)." Bob Sharkey read a piece from a visit to Portland, OR "Taming the Rogue" then one of his 64 word experiments, this a prose piece, "Beside the Rental" included a character from his long serial piece "Sustenance." 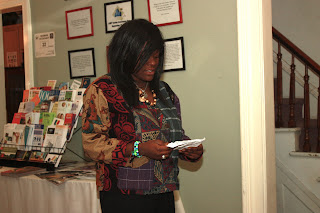 Jalani Willis showed up unprepared to read, but found a short piece on starting a new day -- & it was her first time reading! Robert Eden also wasn't prepared to read but called up one of his Blog entries on his laptop, an impressionistic piece on walls & mirrors based on his research he his doing about a psychiatric hospital.

Our host, Don Levy, read 2 very recent poems (you can find them both on his Facebook page), "Gossip 101" & "The Insomniac Muse."

Check out this casual, intimate reading & open mic at the Pride Center of the Capital Region, 332 Hudson Ave., Albany, 2nd Wednesday of each month.
Posted by DWx at 8:42 PM