Back in the backroom of McGeary's, Clinton Square, Albany, NY, on the last Monday of December or, as our host, Mary Panza, characterized it, "the post-holiday hangover edition." She herself was treating the disorder with pumpkin spice martinis & it seemed to work. There was no featured poet, but plenty of this town's fine open mic poets -- & a bad gift exchange at the end.

But first the poets, with Cheryl A. Rice playing off a water theme in a poem titled "Hot Tub," then a water bed poem, "Lake of Dreams." Joe Krausman read a piece written today for the season, "Lists" & then a poem about looking for a companion, "My Pension Won't be Enough…" Sylvia Barnard read the poem she read at the third Thursday reading, "My Grandmother's Store" & another family piece "My Grandmother's Bones." My only poem tonight was about a visit to the UC Berkeley campus, "My Sather Gate Illumination" (for my daughter Madeleine).

Tess Lecuyer read a couple of poems written for the Winter Solstice, one from 1993 about a troop of girls in tap shoes at the mall, & another about the cold solstice of 2000. Carolee Sherwood described her 2 poems as "indulgent" & "sentimental" (which sounds like descriptions for most poems), indulgent being "What to Do with the Dead in 2011" then the sentimental, for her son, "Ben Baking Bread." Thom Francis did one of the poems he performed with Murrow at the third Thursday event, "Shackle" ("…your cold embrace…"). 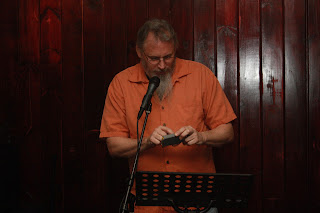 Dain Brammage said he felt good this Xmas for the first time in many years, but attempted to read an old poem about depression, "Sometimes," but then just let it go; he is also the Slam Bastard, I mean, "Master" on the 1st & 3rd Tuesdays over across town at Valentines so performed his signature "Slam" (in essence, "it's not in the writin' it's in the recitin'").

Mojavi, after a long introduction, read an intense love/sex poem "Transforming Fear into Unconditional Love" with images of swimming & a new mind. Elizag slipped in late to read a couple of "black-out" poems, "Adult Low-Dosage Aspirin Bottle" & "Cleaning Products are More Optimistic," then read a list poem, "Magical Thinking." The last poet up was Poetyc Vyzonz reading "The Love" in the voice of god (or God).

All I will say about the bad gift exchange is that we were all hoping that Joe Krausman would try on the 3-inch brightly colored open-toed shoes (that came with a pink clutch bag long enough for a .357 Magnum), but instead he traded with Elizag for an out-of-date commemorative beer mug. Perhaps she will show up at the next Slam in those shoes ("it's not a costume, it's what I wear -- don't talk to me about it!").

And did I notice a theme when I picked those poems?? Noooooo....xo

We know, we know.