I don't usually "allow" guitar players at my poetry open mic, having in the past been too often the ugly-stepchild-of-poetry at music open mics, but tonight I had to make an exception because the unique poetry-performance duo Murrow was the featured performer. It was also the night of the annual visit from Sanity Clause. But unfortunately for Sanity Clause the tour bus full of suburban housewives couldn't find a parking spot, so most of the bad poets to sit on his lap were guys; some seemed to enjoy it more than others, hmm. There was a gift of poetry for all, of course. The muse for the night was one of my favorite poets, Enid Dame; I read her wonderful gift from 1996, "Holiday Poem."

First up for the open mic was a third Thursday regular, Alan Catlin with a look at "Moe, Larry & Iggy Pop," bar stories of fake veterans. Beatriz Loyola graciously responded to my request to read a poem in Spanish, her native tongue, with "Recuerdo infantil" by Antonio Machado (1875 - 1939), then followed it with a translation in English. Josh McIntyre was next with his brief poem "Precipitant" thinking about life, with images of protestors in the street. D. Alexander Holiday's "This Involuntary Leave of Absence as Punishment Routine" continues the saga of his last book Emails from Satan's Daughter.

Gene Damm read a short poem, "Motivation," from his book Guanyin and other poems (The Troy Book Makers, 2009). Joe Krausman's full poem was titled "Half." Bob Sharkey returned with "Surveillance," another poem in his self-imposed 64-word form. 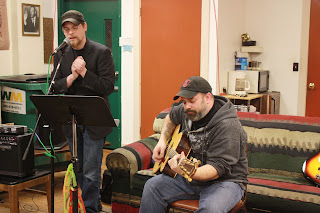 Thom Francis (word) & Keith Spencer (guitars) have been performing as Murrow long enough for many of us have our own favorites that we are glad to hear over again in performances. But Murrow is fluid enough to bring in some new pieces too. Starting with a favorite, "Trucker," they caught our attention, then on to the sad "Shower." Other pieces included "Smile," "New Day," "Shackle" & "Gone." But in between a cover of a piece by Henry Rollins, "I Know You." They ended with the crowd pleaser "Female Pedestrian." A good set & I'm glad I let in the guitars.

After the break I continued another annual tradition by reading "Christmas Eve, 1945." W.D. Clarke read a spoof about a visit from the Queen to a special royal outhouse, "The First Seat."

Screamer's poem was a love poem portrait of her & her boyfriend's opposite tendencies. Sylvia Barnard supplemented her poem "My Grandmother's Store" by passing around a century-old photo of her grandmother behind the counter of the store.

Daniel Nester read axioms, aphorisms, commandments, etc. from "The Book of Dan" (his, not mine). Anthony Bernini gave a taste of his featured reading right here next month with "The Sirens" from Immediate Worlds (The Troy Book Makers, 2011). ILLiptical (last month's feature) did a poetic tribute to the singer Sam Cooke, using titles & lines from his songs. Kevin Peterson (SBT) read his piece "Coin Flips" from 2 columns of slim lines on a yellow legal pad. Avery was the night's last poet with "Reichenbach's Mistake," written, as he said, as an angry young philosopher.

Each poet who read went home with a gift of a book or magazine of poetry & the pleasure of having sat, albeit for a brief moment, on the lap of Sanity Clause -- &, as everyone knows, there is no Sanity Clause.