Once again I went down to Valentine's, hoping for a slot in the Slam (&, of course, hoping to make it at least to the second round). But first an interesting open mic, where folks seem to do real poems, rather than just perform. Mojavi was the host, telling us "Twitter is where it's at."

Poetyc Vyzonz began with a preview of his in-progress CD. Tom M. did a really fine hip-hop piece, "fuck school," that probably would have done well in the Slam. (Prof.) Daniel Nester read from his memoir, "Moby Cock," how he got a C+ in America lit. (his students beware!). 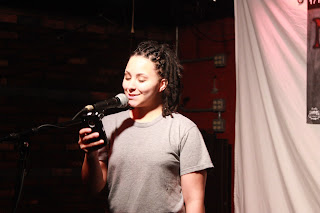 A new voice/face on the stage was Kat SoPoetic, with a piece using terms from anatomy & physiology, "Anatomy & Poetry." 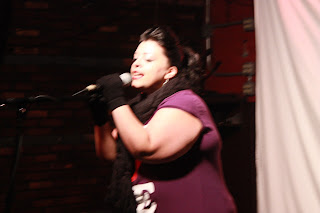 Another new poet was Sibie with a Xmas song & Xmas poetry. For all his snarky shenanigans as open mic host, Mojavi read a tender, gentle love poem, then capped it off with a piece on police violence.


Well, there were only 6 of us in the first round of the slam, & I was the last performer with "One Day Longer" & I still ended up on the bottom (tied with Tom M.). You can see all the scores & a summary of the event (& my purple beret) at the AlbanyPoets website. Kevin Peterson won, for the second time in a row, & once again the indomitable Shannon Shoemaker was in the money, placing 3rd.

All you Slam Champions beware -- I'll be back & if I get into the second round I will kick your ass(es), at least somewhat, whatever.

Check it out on the 1st & 3rd Tuesday of each month at Valentine's rock'n'roll emporium on New Scotland Ave. in Albany.
Posted by DWx at 11:57 AM

don't give up! Consider it cross-training. good for all the wordz