As the most documented reading in Albany (or elsewhere) my comments are a bit superfluous, but then no one else has my opinions (or cares about them for that matter). Plus I got there late.

Poetyc Vyzonz was just coming off the stage before a smallish audience & even smaller field of slammers (4-4-2) tonight. The other contestants were Shannon Shoemaker, Elizag & Kevin Peterson performing as Succulent Baby Toes.  In spite of Kevin/SBT's 30 in the first round, the better poems of the night were Elizag's "Meatball," a continuing commentary, & Shannon's second round poem beginning "My name is Shannon Shoemaker, I don't do slams…". Although I also rather liked SBT's final round piece on religions & living in the moment, albeit somewhat formulaic. 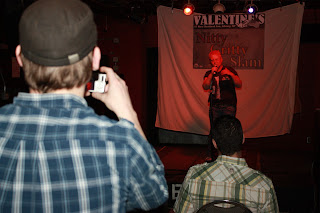 It should be noted that Shannon has finished in the money in 6 of the 7 Slam's she has participated in & seems like a "shoe-in" for the Slam team if the organization decides to go on the road.

Check out the detail here.

Email ThisBlogThis!Share to TwitterShare to FacebookShare to Pinterest
Labels: Slams

Hi Dan glad you liked meatball! thanks for the praise. means a lot, especially since i scored so low! try not to take the competition too seriously, except as a motivator.