Tom Nattell started the poetry open mic at the QE2 in Albany in March 1988 & he is considered by many to be the “grandfather” of the busy poetry scene here. He died of cancer in the early morning hours of January 31, 2005. That evening, which was the last Monday of January, he had been invited to be the featured poet at a new open mic series, Poets Speak Loud!, at the Lark Tavern on Madison Ave., a series that continued up to 2020 when COVID-19 shut us down. This year the annual commemoration of his life took place on Zoom, which ironically made it possible to for many folks, including Tom’s family, who no longer live in Albany, to attend.

I started off the open mic with a reading of a short elegy for Tom “Theology 101,” then on to the open mic.

The first of the open mic readers was Noah Nattell, Tom’s son, who now lives in California, he read poems by Tom, beginning with “Juniper” (Noah’s daughter’s middle name), & “South End” which Tom liked to do as the first poem when the 3 Guys from Albany did poetry workshops in schools. 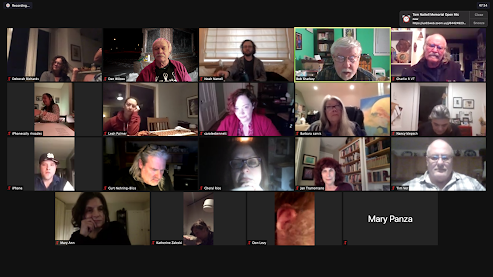 Charlie Rossiter, fellow member of 3 Guy from Albany, debuted a new performance piece inspired by the type of poems Tom would create, “Ode to a Cake Cover” that becomes a gong.

Sally Rhoades, who had been in the Park & was the one who tossed the beret up to the Robert Burns statue, talked about her first meeting Tom at the QE2, then read a poem just written about Joe Biden, “Tears Welled Up,” from watching the Inauguration.

Kathy Zaleski, who had read at the QE2 in the early days, has since moved to Philadelphia, & it was good to hear her read, & she said hasn’t read out since Albany; she read 2 poems she wrote in the Summer, dated not titled, from June 15, 2020, at Washington Square in Philadelphia, a swirl of free-association images, like what I remember her reading in the past back in Albany & Schenectady open mics.

After some “fiddiddleing around” (an actual expression my mother would use) I eventually got the video & the sound playing for a segment from the 3 Guys from Albany performance of our “Dead Artists Program” recorded on October 9, 1996 at what was then the Rensselaer County Council of the Arts in Troy, 3 tribute pieces Tom wrote, one each for Andy Warhol, Frank Zappa & Franz Kline. Thanks to Charlie & to Jack Rossiter-Munley for making this possible.

Mary Ann Murray is another poet who had been around in the early days of the QE2 when she was a student at SUNY, & is now back in upstate New York; she read an homage that she had meant to read at an earlier memorial, “What I Remember of Tom Nattell,” which led us to a discussion of “what would Tom say…?”

Curt Nehring-Bliss was also around in the early years, left the Albany area in the mid-90s &  is now in the Finger Lakes, read some thoughts he’d written about discovering the QE2 open mic, how Tom’s presence put him at ease, a tender remembrance.

I met Barbara Sarvis via Zoom at Charlie Rossiter’s 2nd Tuesday open mic & was glad she joined even though she had never met Tom, she read a new piece, an activist poem, “Open Your Window, the 5 Senses of Poverty.”

Cheryl Rice certainly was around in Albany in the early poetry scene; she read from her chapbook Moses Parts the Tulips (A.P.D. 2013) “Cranes (for Tom Nattell)” & “Reading at the Q, Memorial Day,” celebrating Albany, the QE2, & Tom.

Christopher Ethan Burton said that this was his 1st Zoom meeting, he began with “A House of Bedlam” a grim description of prison, in terms of the historical Bedlam, then from his recently published chapbook Once Upon a Time in America he read the title poem.

Nancy Klepsch worked with Tom early on particularly with the Poets Action Against AIDS, she read “Letter from a Live Teacher to a Dead Teacher” looking back from this pandemic to a friend who died of AIDS, & “You Know My Mother Was From Corona” (in Queens NY, that is) also written in this pandemic.

Jan Tramontano is still in Florida, & told how she got to know Tom through the NYS Museum education program, Time Tunnel, where Noah & Jan’s daughter went, he then encouraged her to read at the Cafe Web open mic; her poem “For Tom” from her chapbook Woman Sitting in a Cafe and other poems of Paris (JMT Press, 2008) where the birds she hears, & the young couple she sees reminds her  of Tom.

Tim Verhaegen, who does a periodic open mic on Zoom talked about how he went to an AIDS open mic where he first met Tom; tonight he read his poem, ”How I Write a Poem,” a funny stream-of-consciousness about writing this poem with the voices arguing in his head -- as someone said, “a classic Tim poem.”

& then it was time for the finale, I read my poem “Chasing Tom” as I do each year, but now, with the wonders of Zoom I was able to show some pictures of Tom, not as smoothly as I had hoped but something we couldn’t do at the in-person open mic memorials in the past.

Noah wandered his house in California with Tom's artwork on the walls, such as his drawing/poster of Rhinoceros, his poem based on the Eugene Ionesco play. It was like a party ending where people drifted off, we waved, & smiled & hoped for hugs, until the next open mic somewhere, here or there on cyberspace. &, as Tom would say, "May the Muse be with you."

It sounded like a beautiful tribute to Tom, and I'm sad I missed it. If ghosts can find their way to Zoom, I'm sure he was with you.
xo
Michele