A short Zoom ride across State lines for poetry, spoken word, music, whatever, without getting dressed or going out. Our host Charlie Rossiter has been getting a good crowd here of late on the 2nd Tuesday of the month.

I was up first for the open mic, we did 2 rounds, 1 piece (mostly) each round & I began with “Birthday Poem 2021” — In the 2nd round another birthday poem of sorts, a piece performed in the 3 Guys from Albany repertoire, “To My Penis, On our 45th Birthday,” just to give you some idea how old this poem is. 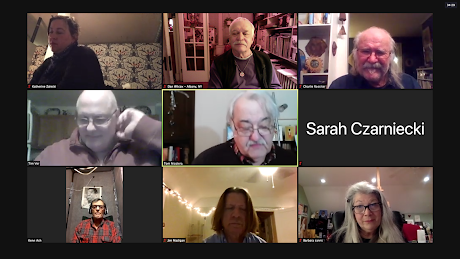 Jim Madigan has been a regular here, Zooming in from Oak Park, Illinois, in his first round read a assignment from a writing class to write a postcard poem, this about the events of January 6 in the words of the late Ashli Babbitt. — For his 2nd round a description of brothers riding, a poem titled “Five Horsemen” including 2 sung lines from “The Wayfaring Stranger.”

Tim Verhaegen, who has his own occasional Zoom open mic was next, said he was “raised on Joni Mitchell, Melanie & Carly Simon" did a piece incorporating Carly Simon's lyrics as  “Carly Simon & me 1971” as a 10 year-old in a conflicted family. — For the 2nd round he read a funny, satiric prose poem, inspired by news headlines, about the reincarnation of cats, dogs & celebrities.

Barbara Sarvis, who does live in Vermont, but glad not to have to drive down to Bennington, read a piece from a recent poetry workshop that she attended, an excerpt from a list poem on the topic “What I Miss.” — Her 2nd round poem was a very short take on the events of January 6 “Tarnishes the Soul.”

Tom Nicotera also read a piece about the raid on Congress on January 6, pondering “Do I Need to Buy a Gun?” — Back in December Barbara Sarvis had read a piece about going to confession, & tonight Tom responded with a memoir piece of his 1st confession, his only sin being missing Mass except for Christmas, Palm Sunday & Easter (because his parents were divorced & so did not go to Mass every week).

Katherine Zaleski, formerly of Schenectady & who had shown up for the Tom Nattell Memorial Open Mic last month, Zoomed in from Philadelphia, read an older poem titled “Memories” from 2007, thinking of death & of someone who had been shot. — In the 2nd round she read a more recent poem, also a meditation on loss dated from May 12, 2020, working in images of a watercolor.

Another regular here, Kenn Ash, read “Ode to a TV Horse” which was a litany of the famous, & lesser known, equine companions to 1950s era cowboy (& cowgirl) TV characters. — Then later read about a man who couldn’t sleep, plagued by “Shadows.”

Our host, Charlie Rossiter, took the last slot in each round, & in his 1st round read a remembrance of being in northern Wisconsin “Take Me back to the Tin Hotel…” — Then, at the end, brought us all home with a reprise of the performance piece he did at the Tom Nattell Memorial about the beauty hidden in the everyday, “Ode to a Cake Cover” (which was really a gong).

A congenial group over in Vermont & great to not have to drive (I always prefer to walk, or take the bus, but that would be even worse than driving from Albany). It happens on Zoom on the 2nd Tuesday of the month at 7:00 PM (Eastern Time Zone) — email Charlie at charliemrossiter@gmail.com for the link.