Tim Verhaegen, our host, likes to do the 2 round thing & everyone seemed to have 2 poems tonight.

I started off the sign-up list with a couple of older pieces, in the 1st round “Henry Rollins” about a late night phone call, then in the 2nd round one based on a listener’s reaction to one of my lines at a 3 Guys from Albany performance, “Said Again,” about living long enough to recycle your love poems.

Katherine Zaleski, dialing in from Philadelphia, PA read 2 poems from 2020 &, of course, the quarantine, both on lost love, on the 1st go-around one from May titled “Remember,” then on the next round, from July, “City” a descriptive piece about walking her dog, thinking of London.

Avery Stemple’s 1st round piece was titled “Tell Me the Story“ about a high school friend who o.d.’d on heroin, then on the 2nd round an homage to the William K Sanford Library in Colonie (& all Libraries) & about the joys of reading.

Our host, Tim Verhaegen, in his 1st round read a very new, very explicit “Wrestling Anthony Pagatino” about being a 15 years old “pussy” on his school’s wrestling team, then later a revised version of “Carly Simon & Me 1971” which he has read before, about figuring things out in his dysfunctional family.

Bob Sharkey likes to write Centos on poems from in The Best American Poetry anthology & read the recent “Cento Forming an Idealized Notion of my Mother,” then in the 2nd round, a poem from his head last night, thinking about the poetry submissions from Nigeria to the Stephan A. DiBiase Poetry Contest that he coordinates, trying to reconstruct the poem now, what they write about (he said that 1/4 of the submissions this year were from Nigeria). 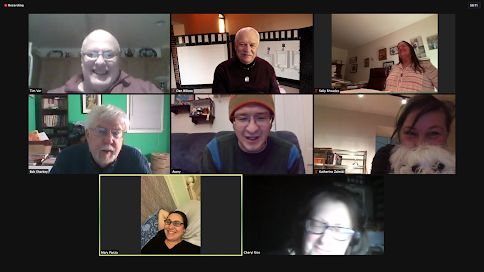 Mary Panza read a poem based on a conversation with her daughter, “She Asked Me How We Walk in High Heals” remembering having mono in high school, her father as "a complete bastard," a weaving of the past & now, then in the 2nd round one titled  “Parked Cars” about growing up  in South Troy, a boy watches her, what was to come, years later he commits suicide.

Sally Rhoades’ 1st round poem was an old piece “I Contain Multitudes,” then in the 2nd round one from around 2000 at the  Dodge Poetry Festival “In the Year 2525 (for Gerald Stern)” remembering playing spin the bottle.

Both of the poems that Cheryl Rice read were from her Ziegfield Follies series, in the first round one written today, still in her handwriting, “A Pretty Girl” (“… is like a melody”), then in the 2nd round she concluded the open mic with one titled “Garden of Dreams.”

If you are not on Tim’s list (much better than Santa’s list!) for this open mic & want to be (why not?), send him an email at tverhaegen1@gmail.com — tell him I sent you.