Gloucester, as many of my readers know, is a favorite go-to-place, not the least of the reasons for the Gloucester Writers Center. Alas, I have not been there since August — but the wonders of cyberspace makes it possible to “be there” on the first Monday of each month for their open mic. The host is Roger Davis, who has a knack of drawing the readers into conversations about their work, or just about their lives, about such things as wood stoves, how we write, or even how the World changes.

Virginia McKinon, whom I’ve heard read on many occasions in Gloucester, read a story from a writing assignment about the scissor grinder in Gloucester, inspired by the collection of short pieces by Peter Anastas At the Cut (Dogtown Books, 2002), then on to a poem titled “Nature on the Terrace” which she said was her first poem written recently. 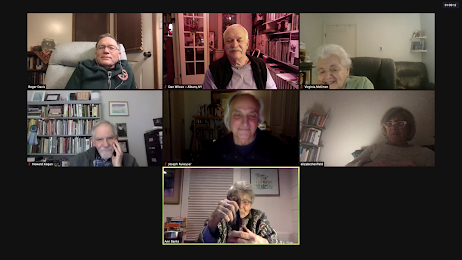 I read next, an old elegy for Tom Nattell “Chasing Tom”, then to one written very recently “Birthday Poem 2021” as part of my practice of writing a poem on my birthday each year.

Howard Kogan, now living in Massachusetts, said that he’s been reading lately the stories of Isaac Bashevis Singer’s (1903 - 1991) & read a poem titled “On the Royal Road” (i.e., what Freud called dreams) dreaming about Singer’s places. [Did you know that Singer delivered the commencement address at the State University of New York at Albany in 1981?]

Joe Rukeyser read a recent story/personal essay “These Uncertain Times” inspired by going thru a box of articles & finding a scholarly one on A.I., certainly/uncertainly.

Ann Banks said that she was here just listening, then talked about stories for her great grandkids using felt characters; in response to Roger’s questions she said that she was a former kindergarten teacher & started The Bookstore on Main St. that we all know so well.

Elizabeth Enfield read “Cuckoo,” a story/memoir about going to antique shows in the suburbs of Philadelphia many years ago, staying at her boyfriend’s family house, messing with the grandmother’s cuckoo clock.

Roger Davis noted the wind howling tonight & read 2 related poems, “Beech Leaves” hanging on in Winter, in parts named after the months of February, March, & April; then a poem titled “Winds” in its musical language.

This open mic takes place each first Monday of the month, check out the Gloucester Writers Center website for details about it, & much more. Perhaps I’ll see you “there” next time.