Valentine’s day, but no requirement that you read love/hate poems, although some did happen. In fact, the theme of the day's discussions before & after the open mic seemed to the COVID vaccine, who got it/where & reactions, chaired by our host Nancy Klepsch. I think I’d rather discuss ex’s.

I was up first & my first poem was indeed a love poem of sorts, “The Phrasing Must Change” based on a poem by Rumi, then a new piece “Dinner at the Bar” in which both bartenders & undertakers offer a box to go out with/in.

Howard Kogan read a persona poem, as he said, “what passes for a romantic poem” titled “Say Grace” in which a guy hooks up with a former girlfriend who wants him to go to Bible study, then to “New Year’s Day” a piece based on a story told to Howard about the kindness of a child to a grieving adult. 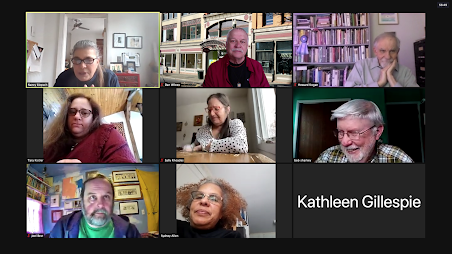 Bob Sharkey’s poem, also a persona piece, was inspired by the writing on the back an old postcard, in the poem a woman takes a trip to Boston.

It seemed to be a day for persona poems, as Sally Rhoades read an old short story written when her kids were little, in the voice of “old reliable Agnes” contemplating her fate & the changes in her life.

Both of Tara Kistler’s poems were very short, first the silly “Poem for Valentines Day” then an even shorter poem “Hydrocodone.” There are some poets out there (not at this open mic) who could take important lessons from her.

This was Sydney Allen’s 1st time here & turned me on with a sexy fantasy about a backless dress “The Getup” — I hope she comes back.

Both of Kate Gillespie’s pieces involved houses, the first titled “The Dream of Home,” the second about a black cat that shows up  in a snowstorm “At the Door.”

Our host Nancy Klepsch read a poem titled “Artifice,” responding to the quote “they clap for the money,” by Susan Sontag, from the Martin Scorsese/Fran Liebowitz Netflix series Pretend It’s a City.

Joel Best read 2 poems from what he called the “alternate universe” he lives in, “Is How to Be Now” ghosts changing sheets, etc. & other weird connections, then “Pick Up Sticks” a title he said he has used many times.

It’s easy to know when this open mic takes place, it’s the 2nd Sunday @ 2 — check out the Facebook page for the link, or email me.

P.S. the next one is on Nancy’s birthday.