Trio House Press, based in Florida, has published over 20 volumes of poetry since its founding in 2011. This reading, held on Zoom, was by 3 poets whose work Trio House has published, Bradford Tice (What the Night Remembered), Artess Bethany White (My Afmerica), & Michele Battiste (Waiting for the Wreck to Burn). The reading MC was Tamara Madison, another Trio House poet (Threed, This Road Not Damascus), who introduced Tayve Neese, the Co-founder & Co-executive Editor. 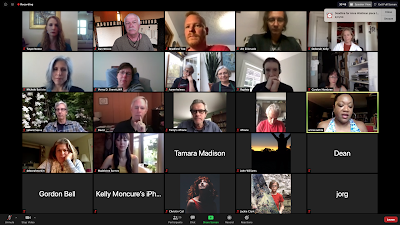 The poems of Artess Bethany White dealt with history & race, such as her first poem, “A Meditation on the Toppling of the Confederate Silent Sam Statue.” Her reading included poems from My Afmerica, such as “Plantation Wedding,” “An American War in Spain,” & “Mississippi June.” Whereas Tice’s poems were exlusively discursive, White’s were more rhythmic, using slant rhymes, & the musical play of words. She ended with a “new/new” poem which she said she was editing before this reading, a ghazal dedicated to the recently murdered Ahmaud Arbery. 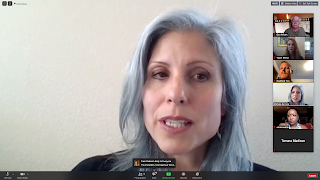 I’ve been an admirer of the poetry of Michele Battiste ever since she first came to open mics in the Albany, NY area years ago, & I’ve featured her at poetry events that I organize. She also read primarily from her Trio House book, the stunning Waiting for the Wreck to Burn, winner of the 2018 Louise Bogan Award, including the opening poem “Ruination,” & others to introduce the town of Ruination, another she said she had not read out before today “When the Light Falters,” then to add some cynical humor to the grim the wonderful “Almost Adulterer’s Guide to Menu Planning.” For her finale she brought out a piece from a new series of “augury poems,” tossing out to the audience to select from a couple of options, the most votes for “The Torch Singers.” The series is set in another made-up town, this called “Elsewhere” (sounds like Pennsylvania or Alabama), the auguries like Tarot Cards, with a poem then a description of the meaning of the “card.” I’ll buy the book!

This reading is part of an online series by Trio House Press to spotlight some of their authors, check their Facebook page for the next events.