Calling All Poets, May 1


CAPS is a monthly series in New Paltz, which I’ve missed for more months than I dare to admit to, but tonight I could save the hour drive down, hour back, by just staying home, pouring my own drinks & I didn’t even have to wear pants — a result of being sent to my room by covid-19, & Zoom. 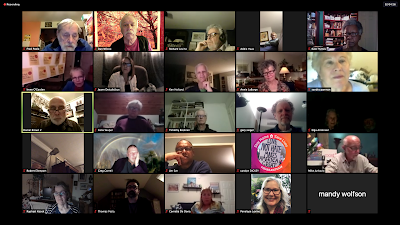 Mike Jurkovic was the host, while Greg Correll handled the vital logistics, assisting folks to sign in. The sign-up sheet was to use the Zoom Chat function to let Mike know if you were interested in reading.

The reading began with the 2 featured poets. First up was Annie La Barge, who prior to this ran the open mic at the Kingston UU. She read a series of poems about her time since an accident some years ago that left her with a brain injury, beginning with what she remembers of the accident itself & the after effects, like a series of notes patients are sometimes encouraged to keep. Other poems were about the resulting confusions, up to now on mistakes & the joy of cats, ending with a poem about helping a woman in a nursing home by reading to her.

The second featured poet was Irene O’Garden who began as many of us do with “Morning Coffee” complete with a coffee mug for show-&-tell. She also read a series of recent poems about surviving during this time of being shutdown, “Shaving the Parmesan,” another coffee poem, one on a practice of letting go, one titled “Aries in Shock,” & even “Zoom Dinner Party.” She did a piece from her 2013 book Glad to Be Human, then ended with a long piece titled “The Tell of Israel” that was more liked unedited notes.

Then on to the open mic & even here I ended up first, & since it was May Day, the International Workers’ Day, I read my tribute to postal workers “Going Postal.” Fred Poole read a cluster of mostly short, enigmatic poems about memories of the past. Richard Levine began by muting himself, but when that got sorted out read a poem on hand washing. David Brown read a poem about his twin who died at birth “The Gift.”

Joann Deiudicibus read an adoring hagiography on the poet Anne Sexton. Cornelia De Dona said it was her first time to a CAPS open mic, her piece was titled “Riding the Virtual Covid-19 Bullet Train.” Ken Holland began with a poem titled “Bodies on Consignment” then read one to his mother “Sorry.” Sandra Panman, who also said this was her first time here (wherever “here” is on Zoom), read 3 poems, one titled “Tiger Lillies in July” which was for her late husband.

There were more poets, at one time there were 25 of us on the Zoom group screen, but I got interrupted by a phone call & had to leave, slipping out the backdoor one might say, but it was no drive home.

You can find the Calling All Poets Series on Facebook where they will list future such readings & open mics, one held on the first Friday, but others throughout the month.
Posted by DWx at 5:28 PM