Schenectady open mic, tonight on Zoom for the 1st time with the usual host Jackie Craven, & it went well. Folks seem to be getting used to this & finding their way around.

Bob Sharkey read “Wedded Poem” which acknowledged & celebrated his wife & his 50th wedding anniversary, which became a topic of informal conversation throughout the reading (see my remarks at the end). I followed with on of my pre-pandemic poem from my writing vacation/retreat in Gloucester in January, “Hanging Over the Edge.” Catherine Norr who hasn’t been in the area for a while shared a poem about finding the site of the former family home in Kansas City at “The Corner of 4th & Vine.” 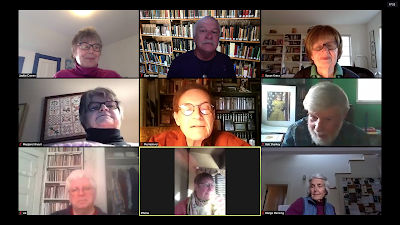 Margaret Bryant’s poem “The Sun’s Journey” was an end-of-year meditation on a lifetime of seasons. Margo Mensing read a recently written poem titled “Nothing is There” with the memorable ending “we refuse to materialize.” Scott Morehouse, who appears on the screen as “Pierre Oliver,” took us back to his childhood with a piece titled “Child Star,” imagining himself as Little Lulu’s co-star, Tubby, then becoming a star on his own.

Susan Kress read a covid-19 poem, “Motherhood,” about her shopper when she took up online-shopping for groceries. I had my own co-starring role in Alan Catlin’s poem “May Day Dream Poem” going to a baseball game in Japan, which you can find on the 2nd Wednesday Poetry Facebook Group. Our host Jackie Craven ended the evening’s poetry with the intriguing fantasy “I Renounce My Life as a Philodendron.”

Throughout the night Bob Sharkey’s poem elicited remarks about their either recently past, or upcoming 50th wedding anniversaries from Margaret Bryant, Susan Kress & Alan Catlin. Scott Morehouse said this would have been his 50th anniversary if he had stayed married. & later I realized that back in November I would’ve celebrated my 50th wedding anniversary to my first wife. I guess we all married young.

We’ll probably be back on Zoom next month for the 2nd Wednesday Poetry Night, perhaps 7:00PM, check the Facebook Group mentioned above for information.
Posted by DWx at 3:49 PM