Poetic Vibe is one of the first (& few) regular venues (Weekly!) that jumped on the Zoom flying saucer to take us into whatever you call this strange event happening in my house when I should be driving to Troy. D. Colin is our Captain Mama to get us there/here. She started us off with a poem using words others provided at a workshop as a way to set the stage for the open mic, no featured poet tonight but often there is. 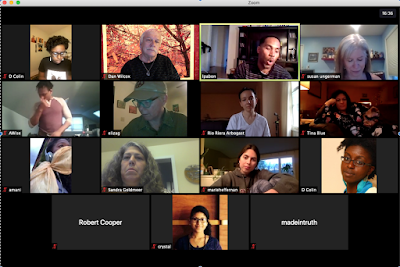 Adam Wise was first up with a poem for his mother, just written today. Luis Pabon (aka L-Majesty) read a piece titled “No Man’s Reality” about when your partner is no longer interested, & a one for fathers with sons “Fathers, Protect Your Sons.” I read 2 recent poems, “Easter Sunday” (“social distancing sucks!”) & a poem/joke for April 30 Poem-in-your-Pocket Day.

D. Colin hit one of those Zoom moments when folks who had signed up didn’t seem to be there/here, so read a couple of her own poems, the first from August about the sight of tree while driving brings to mind black bodies shot, then a poem titled “Dragon Breath.” Analysis called in from Baltimore with a rhapsodic word-play love poem with Scots images “Laura Dreams of Lochs.” Truth read from what he called his “constant stream of notes.”

Marie Kathleen Hefferman’s poem “Woman” came out of a line from the poet Anne Sexton, then read a descriptive autobiographical piece “Who Am I?” Rio Riera Arbogast read a descriptive love poem to Spring. Amani, whose video image had shown her strolling through the city streets, read “The Scent” which had been written on a plane going to Cuba in 2016, then had another of those Zoom moments, this where she was interrupted by a phone call. Tarishi Shuler’s poem “Everyday” was for the mothers.

One of the fascinatingly attentive things that Danielle does each Poetic Vibe is to create a found poem, or what she calls the take-away, from each of the poets who read, essentially a cento built with the lines she hears.

Then a last-minute surprise before we hung up, a tender, very short poem on family by a poet who was only described (& could be heard as) “a young person.” Anyone can walk through the door, real or virtual, maybe he'll be back someday.

You can find Poetic Vibe through their Facebook page & sign-in to Zoom to read or just to listen.
Posted by DWx at 10:07 PM