The evening readings at Split This Rock are open free to the public & are the only events where all the conference attendees gather together. Danez Smith (member of the STR Board of Directors) & Dan Vera (one of the planners of this year’s festival) had fun hosting the night’s reading. 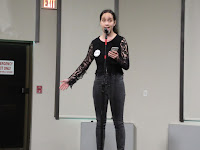 Another feature of the readings is the inclusion of a poet from the DC Youth Slam Team & tonight Dani Miller wowed us with a poem that listed all the reasons why she was tired of writing poems on oppression (aren't we all!). 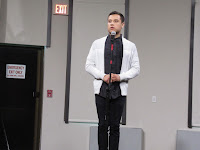 Each year, whether or not it is a festival year, Split This Rock hosts what is now called the Sonia Sanchez - Langston Hughes Poetry Contest & the winner gets to read at the featured reading. The 2018 winner of the contest was Jonathan Mendoza who read his winning poem “Osmosis” that begins with a description of the death of Prudencia Martín Gómez, who came from Guatemala & was trying to cross into California, the poem playing on water & “ICE.”

Another tradition is to play a recording of one of the gone poets & tonight it was of the Central American poet Claribel Algería, a great activist as well. 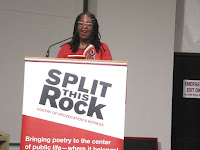 The first of the featured poets was Camille T. Dungy who began with an anti-war poem from 2003 “Daisy Cutter” (the deadly anti-personnel bomb), then one of her poems from the Split This Rock section in the April issue of Poetry “this beginning may have always meant this end.” In her poem “What We Know I Cannot Say” she thinks about the trees after the fires in the West, while “On Angel Island Immigration Station” dealt with the incarceration of immigrants here. She ended with 2 poems about children, “Frequently Asked Question #7” (on a plane with children) & a poem about her 1st year of having a child, life as a mother, poet & activist. 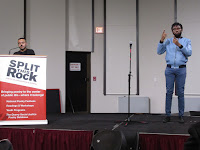 Javier Zamora’s poems were about being an immigrant, he having crossed the border in 1999. He began with “To Abuela Nellie,” later also a poem for his grandfather, & in between “2nd Attempt Crossing, for Chino.” He wrote about the homeless in Nogales, “Citizenship,” & a medical exam “Doctor’s Office 1st Week in this Country.” He ended with “Instructions for My Funeral.” He too has poems in the April Poetry. 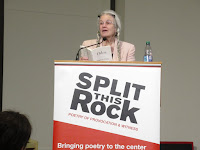 Sharon Olds had been scheduled to read at the 1st Split This Rock, but she had had to cancel, & how here she is 10 years later. She also had poems in Poetry but saved a reading of one of them for later in the festival. Tonight she read from her 2016 book Odes, beginning with a poem inspired by the poet Evie Shockley “Ode to Whiteness.” Then on to some wonderfully sexy, titillating, but also tender, poems “Ode to the Hymen,” “Ode to the Clitoris,” & “Ode to the Penis,” with “Amaryllis Ode” tossed in. She ended with “For You” a poem that begins quietly enough describing her morning tray with coffee, her phone, then a bird outside, a martin, leads her to think of Trayvon Martin, everything is connected.

I could have left & come back to Albany at the end of the 1st day of Split This Rock, I felt so filled with the spirit of the festival, but there were 2 more days to come, I had to stick around.
Posted by DWx at 9:12 PM

Great post. I am sure. This will help me so much on my project

Body pain is a very common issue that we have to face in our daily life. When you face the issue of pain, it is best if you take the help of the doctor. But every time, you cannot get the help of the doctor. In those situations, to get quick and effective relief from pain, you take the help of the painkillers. Soma pill is an effective painkiller by using which you can get instant relief from your pain. This painkiller has Carisoprodol as the active ingredient. You can buy Soma 350 easily from the market. To enjoy the effects of this painkiller at an affordable price, buy Soma 350 mg online.
Buy Soma 350mg pills Online
Soma 350mg
soma 350mg tablets
soma 350mg dosage

We all have across some or the other body pain at some point in life. Certain body ache can be so severe that it can affect the normal functioning of the person. Therefore to be able to work and function well the person needs to take some kind of medication. The pain medicine that is widely used and accepted by people all across is the use of Soma pill. It is effective in treating a number of body pain caused by different factors. So buy soma pill online to get rid of any kind of body pain to have a pain free and healthy life.
Buy Soma 500mg pills Online
soma 500mg
soma 500mg tablets
soma 500mg dosage

Thanks for provide great informatic and looking beautiful blog, really nice required information & the things i never imagined and i would request, wright more blog and blog post like that for us. Thanks you once agian

wonderful blog!!
Thank you so much for sharing this informative blog
website design in kolkata
https://www.gowebs.in/web-design-kolkata

amazing!!
I have read your excellent post. This is a great job
website design in Howrah
https://www.gowebs.in/website-design-in-howrah

amazing article!!
I want to say thanks for this post. Thank you...
logo design company in Kolkata
https://www.gowebs.in/logo-design

Thanks mate. I am really impressed with your writing talents and also with the layout on your weblog. Appreciate, Is this a paid subject matter or did you customize it yourself? Either way keep up the nice quality writing, it is rare to peer a nice weblog like this one nowadays. Thank you, check also event marketing and conference bio example

Hello, I want to have one of these piercing models, but I am unsure. Can you look at it?