Fresh from the poetic intensity of Split This Rock I was glad to be back at the poetry venues I am used to, among the poets I enjoy, hearing their poems, & back at McGeary’s on the last Monday with Mary Panza keeping it real, or thereabouts.

I was first up for the open mic & read my homage “Golden Shovel for Split This Rock,” then, still on the poetry theme, “Dot Dot Dot” (the ellipsis poem). Joe Krausman’s poems were inspired by what he read in the morning papers, “Sunny Side Up” & “Lawrence Pope” about a former bank president who became a bank robber. Bob Sharkey read about the fairies on “Surrey Hill,” then a poem, “Siege,” influenced by one submitted to the DiBiase Contest reading. 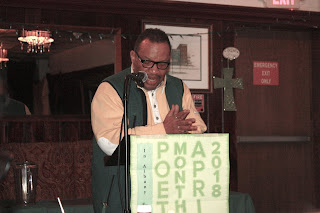 The next poet has been reading out as G. Douglas Davis IV but was introduced as we once knew him D. Alexander Holiday; his first poem was a series of questions allegedly put before Donald Trump before he was President, them a poem on the trial of Bill Crosby as a long letter, “Poem for Camille Following the Conviction.” Julie Lomoe’s poem “Jigsaw Puzzles” can be found online on her website. Robb Smith read one of his salacious grannie-porn stories, this about retirees partying at a casino. 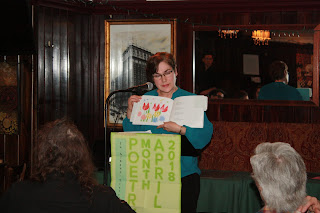 The night’s featured poet was Melody Davis who began with her latest book One Ground Beetle: A Year in Haiku (Bad Cat Press, 2017), with prints by Harold Lohner. It was Show & Tell with Melody reading a haiku or two, then holding up the book to show the colorful print on the facing page. There were haiku on, of course, trees, clouds, birds, round stones, but also on Albany & on meetings. Then on to her 2013 collection of poems Holding the Curve (Broadstone Books), reading the ekphrastic “Caillebotte’s Laundry,” “Walter, the Lawyer,” the villanelle “It Only Starts,” & “Jasmine Boy, Cairo.” She finished up with a “new/old poem” about having hors d’oeuvres at the top of the World Trade Center, & a poem for a trapeze artist, “8 Different Ways to Fall.” A pleasant reading of richly varied poems.

Back to the open mic, stalwart Sylvia Barnard read John Keat’s “Ode on a Grecian Urn” to introduce her own poem based on a text from ancient Greek that she teaches, “The Owl on the Water Jug.” Shannon Shoemaker tried out a poem-in-progress (isn’t that what open mic are for?) “Straight Girl Blues.” 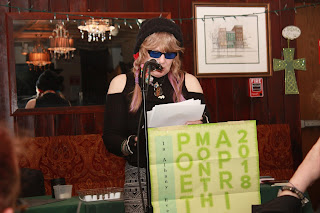 Annie Sauter read a couple of poems from a recent run of 30/30 (30 poems in 30 days), the first an alliterative hippie fantasy/portrait of a girl on a bus, then a poem about rain “Late Night in Central New York.” Next a trio of new readers, the first “virgin” Meghan who read a sad love story “Answers to the Question You Were Afraid to Ask.” Ava read a description of herself in images of food “Lemon Juice.” 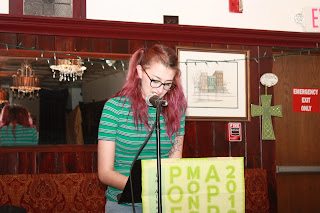 Olivia read a short piece that could have been an response to Meghan's poem, “Questions I Wanted to Ask.” Sally Rhoades, no stranger to the local open mics, read a birthday poem “I Blew Out the Candles” a childhood memoir, then one about a memorial to World War II dead in the Netherlands. Karen Fabiane had also recently done a 30/30, read a poem to a musician friend “Wise Beyond Her Years,” & “Even This.” Tim Verhaegen read a story in progress, a sad autobiographical piece about the love of is life.

As so often happens when Poets Speak Loud! at McGeary’s on the last Monday of the month, a wonderful mixed bag of poets & poetry.