Back to the National Housing Center Auditorium for a panel titled Don’t You Hear This Hammer Ring? Stories from Split This Rock’s Founding, with Sarah Browning, Melissa Tuckey, Regie Cabico & moderated by Tope Folarin. Fortunately, this session was videotaped, because you can’t rely on me for a full report, I was so enthralled to hear these folks talk. Also there is a brief, informative summary of the history of Split This Rock in the program. Regarding the origins of STR in 2006, it says,


DC-area poet-activists — led by Sarah Browning, Melissa Tuckey, and Regie Cabico from DC Poets Against the War & Sol y Soul — began to imagine a national gathering, based in part on the overwhelming response from poets to calls for participation in national anti-war marches. They formed a festival coordinating committee, chose the date for the event — to coincide with the 5th anniversary of the US invasion of Iraq in March 2008 — & found the name “Split This Rock” in the poem “Big Buddy” by Langston Hughes. 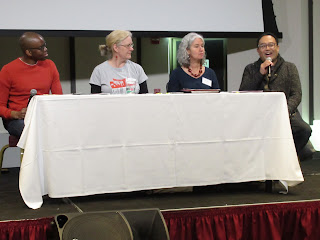 Organizing continued into 2007, including publicizing the upcoming festival at the AWP conference that year. Sarah noted that every poet they invited to feature at the inaugural 2008 festival said yes, 26 poets were featured, at a point where they had no money yet, & even a month before the start there were no venues. Over 250 poets & activists attended the festival in March 2008. The response was so positive that planning was started for a 2nd festival, as well as broadening the organization to one dedicated to the promotion of social justice poetry, not just the festivals. Sarah noted that Adrienne Rich was one of the poets invited to feature at the 2008 festival, but she was unable to attend. However, she made a generous donation to STR & threw her support behind it.

Each of the panelists also made a short list of poets who have inspired them in this project, & read a poem, admitting, as to be expected, that there was a lot of cross-over of their inspirations. Sarah mentioned Martin Espada, Lucille Clifton, & Sam Hamill, & read Naomi Shihab Nye’s “A Dictionary in the Dark.” Melissa’s poets were June Jordan, Adrienne Rich, & Lucille Clifton, & read Clifton’s “Blessing the Boats.” Regie talked about Essex Hemphill, his poem “American Wedding,” Sandra Cisneros, & read Joy Harjo’s “Don’t Bother the Earth Spirit.”

As a result of the Split This Rock festival I eventually brought both Sarah Browning & Melissa Tuckey to Albany for Poets in the Park, & met other wonderful poets, such as Karen Skolfield who read twice in Albany, Susan Brennan who also read, & more that I will try to get here in the future. & the festival has constantly reinforced my commitment to both the art of poetry & the necessity of activism.

Poetry of Praise: Reclaiming Religion and Spirituality for the Resistance was a panel held at the Charles Sumner School Museum & Archives Memorial Hall on 17th St. I chose this over others mainly because I like to think of myself as a spiritual, yet anti-religious, person (as a “Buddhist Anarchist Church-burner” as I’ve been wont to say).

Ayari Aguayo-Ceribo served as moderator as well as participant, & explained that each of the participants were invited to write a new poem for this panel. She began with 2 poems, “Prison” about taking down the (various) systems of oppression, then another “We pray to you…” mixing Spanish & English.

Kazim Ali read his poem “Golden Boy” & talked about growing up in a remote Canadian town, being smart, & different.

Rose Berger referenced both Ovid & the Psalms in her poem “On the phone with My Mother Saturday Morning.” Sunu Chandry’s gentle poem brought together walking in New York City & a woman at a yoga center with the memory of a childhood trip to India. Letta Neely began with a singing a spiritual then into an angry poem proclaiming “We who believe in Freedom cannot rest.” Temin Fruchter read “Prayer for Growing Closer” & “Prayer After Going to Poland.” Marie Varghese told the story of her family founding an Indian Christian church in New York City & read “Sunday Confessionals.”

These stories & poems were often about the conflict between the family religions that the poets grew up in, & that they often still value, & their own emerging sexual/gender identity, in the constant conflict between established religions & the individual’s spirituality not bound by any one set of religious beliefs.

In the questions that followed, Kazim Ali commented that we’re all inventing our ancestry, especially for the LGBTQ community. This was also brought out by the poems by others that these poets read, including Ayari Aguayo-Ceribo reading a long celebration by a friend about being queer, Marie Varghese’s list poem by her sister, & others, including poems by Fanny Howe, Joy Harjo, Alice Walker, Adrienne Rich, & Naomi Shihab Nye.

While I anticipated enjoying this panel discussion I was pleased with the unexpected directions to which the poems & conversation took me, & the cultural/spiritual diversity in which this took place. I guess this is why I keep coming back to this festival.