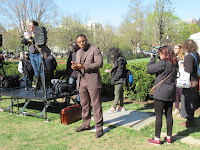 At each Split This Rock festival there is a political action at one of the branches of government. Over the years we have been at them all, but most often at the White House -- after all it is the most stinky seat of power. This Friday morning we were back in Lafayette Park across from the White House on the day of a student walkout to commemorate the shootings in Columbine, CO 19 years ago today. We take our inspiration from the students & Split This Rock organized Louder Than a Gun: a Poem for Our Lives. 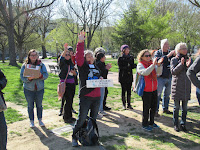 A stage was set up but due to regulations there was no step to get up on the stage so a willing stage hand lent a, well, a hand to each of us. A Cento is a poem composed of lines from other poems, each reader was asked to read a line of no more than 12 words on the theme of ending gun violence, either their own or by someone else, the lines gathered by a volunteer, & the finished Cento to be posted on the STR website.

We took our turns on the stage, then joined students who were gathering nearby in the park. After brief speeches, the students laid down on the grass under the trees, or sat & held each other for 19 minutes of silence for the years since Columbine & all the dead students since then. 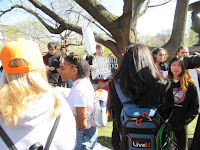 There are no famous poets here, just the students, rising up, creating change. Which is what Split This Rock fosters.
Posted by DWx at 3:21 PM