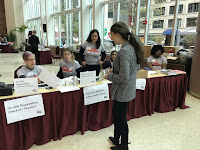 It’s like returning home. Split This Rock Poetry Festival happens every other year & I look forward to it, but this year it fell exactly during Albany’s WordFest, including the Third Thursday Poetry Night that I host, but I had to be here. It was the 10th year of this festival of “provocation & witness,” & I’ve been to all of them.

As soon as I walked in to this year’s site for the festival at the National Housing Center, I saw folks I know & cherish from past festivals, Melissa Tuckey, Yael Flusberg & Susan Scheid, & lo & behold! another Albany poet, Dawn Marar. I settled in with the program booklet to plan my time, but this year I had already picked out possible workshops & panels on the new Split This Rock! mobile app. Each day there were 3 sessions with anywhere from 5 to 8 possible places to be for any session, on a variety of poetic/social justice topics. It is exhilaratingly over-whelming. 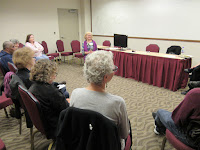 Tributes to Poets Lost since Split This Rock 2016 was my first stop, & it was hosted by Sarah Browning, STR Executive Director. She set the tone with a line from gone poet Monica Hand “We are like Lucille trouble in the waters can’t kill us,” written on the white-board, Monica one of the “poets lost,” the Lucille being Lucille Clifton.  It was an informal gathering, with folks speaking up as the spirit moved them, including reading poems by the gone poets. Sarah, Ann Arbor, Ellen Bass & John Rosenwald did a group reading of Ursula Le Guin’s “Fragments from the Women’s Writing,” others read poems by Monica Hand, & Sam Hamill’s “True Peace.” Sam had just died last week & didn’t make the list of gone poets in the festival program.

I was also shocked & saddened to hear from Ellen Bass that the NYC poet Jackie Sheeler had died, at the end of March as I found out later. Jackie had featured at the Third Thursday Poetry Night at the Social Justice Center in Albany in February 2011. Among the other poets mentioned in the workshop, from the sadly extensive list in the program, were Claribel Alegria, Kathryn Stripling Byer, Mari Evans, Zahara Heckscher, Lucia Perillo, & Derek Walcott. Another mentioned was peace activist Mary Helen Snyder. I paid tribute to Gerrit Lansing by reciting his line, “All things go underground with glee.” 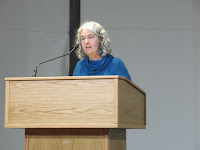 Ghost Fishing Book Launch: Reading & Discussion
Ghost Fishing: An Eco-Justice Poetry Anthology (The University of Georgia Press) was just released, said to be “the first anthology to focus solely on poetry with an eco-justice bent.” It is edited by STR co-founder Melissa Tuckey. This session included 10 readers from the anthology, 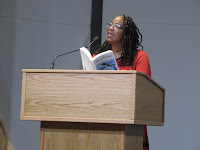 Camille Dungy, “A Massive Dying Off;” Elizabeth Jacobson, “Almonds;” Purvi Shah, “After 2/3 of a Village is Papua New Guinea Is Decimated by Natural Disaster;” 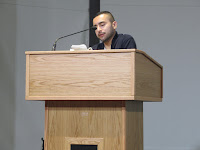 Javier Zamora, “Saguaros;” Nancy K. Pearson, “Brazos Bend;” Katy Richey, “Recovery;” Tiffany Higgins, “Dance, Dance, While the Hive Collapses;” Gretchen Primack, “The Dogs and I Walked Our Woods;” Danez Smith, “summer, somewhere (excerpt);” & Melissa Tuckey, “Requiem.” My poem “Water” is also included in the anthology, although I wasn’t one of the readers. Get your copy through your independent bookstore.


Translators as Activists, Curators, and Cultural Interpreters
While I haven’t done any serious translations, I read a lot of writers who have been translated into English (& a recent Writers Institute reading by Rosa Alice Branco with her translator Alexis Levitin raised issues about moving a poem from one language to another). Katherine Young was the panel moderator; each of the panel members gave a prepared presentation on the project(s) they were working on, then the discussion opened up for the audience, which focused on gender bias among scholars & translators, about controversy over revelations about revered poets, & the necessity of translators providing cultural context to their subject’s work. 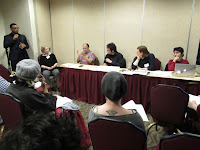 Francisco Aragón talked about the controversial revelation of letters he translated indicating that the beloved Salvadoran poet Roque Dalton was gay, or at least had a homosexual relationship. Aviya Kushner talked about translating the work of a working-class poet writing in Hebrew. Olga Livshin described the relationship of the Russian poet Anna Akhmatova & the artist Olga Glebova Sudeikina, based on translating Akhmatova’s poetry. Finally, Ilya Kaminsky talked about translating poets as varied as Lyuba Yakimchuk, Paul Clean, & Venus Khoury Ghata.

A full start to the first day of Split This Rock 2018, with the evenings readings to follow.