Getting Down to Brass Tacks!, March 29


Albany Poets presented an evening of poetry, spoken word, and stories featuring the first team from Albany to ever compete at the National Poetry Slam, at The Low Beat on Central Ave.

Thom Francis, el presidente, served as the M/C & gave a brief history of the Nitty Gritty Slam that started out at Valentine’s on New Scotland Ave., then moved over to Central Ave. here at The Low Beat, & of the first team from Albany to compete in the national Slam championship. 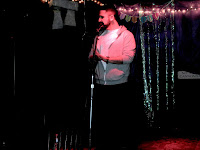 ILLiptical (Michael Sloman) did a set of mostly political pieces, beginning with one about being from a family of Holocaust survivors, one titled “Spirit Akin” on Native American issues, inspired by reading Sherman Alexis, a piece titled “Vegan Knowledge,” among others. 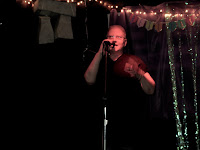 Shannon Shoemaker started by saying she is currently working on "a post-apocalyptic lesbian novel," then moved on to what she said is her favorite Slam piece, “My Name is Shannon Shoemaker” in which she takes on Slam stereotypes. Once at Valentines Shannon & I talked about putting together poems for a reading (or a Slam) & I quoted Charlie Rossiter to the effect that when in doubt pull out the dick poem. Shannon then went on to write an outrageously funny piece using that line for its central conceit, & she end her set with it tonight. 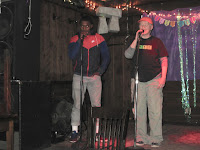 Elizag (Elizabeth K. Gordon) talked about her involvement in Slam starting back in 2011, & how she broke her foot as they left for the Charlottes Slam venue. Her poem on the shooting of Trayvon Martin was written as a group Slam piece, tonight she did it alone, then went on to “Beat Ball” accompanied by Ahmad doing beat box. One of my favorites is a piece on learning to say “motherfucker” & she ended with “Stereotype Threat.” 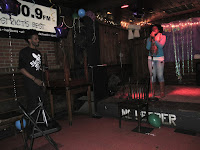 D. (Danielle) Colin has carved out her place on the poetry scene as the organizer & host of the weekly Poetic Vibe in Troy each Monday. She started off with her joyfully self-affirmative piece about her hair, then on to a poem in her forthcoming book “Mourning Sons.” She got the audience to join her in “I Cry for Little Black Girls,” & ended with a powerful confrontational piece “For Every Black Woman Who Has Been Called Angry.”

The evening ended with Poetyc Visionz (Darian Gooden) who was introduced as the “Pastor of Positivity.” He began with a new piece on the history of racism & on the re-interpretation of “nigger” (one of his favorite techniques is to take a familiar image or term & turn it inside-out), then a tribute to music, particularly that of Prince & of Michael Jackson. A piece beginning “Making magnificent metaphors…” was followed by “Not Just Another Love Poem” (love poems seem not to do well in Slams), & ended with one of his classic pieces with audience participation, splitting the word “Po - et” in which he tends to become more a “preacher” rather than a “pastor.”

It was a good evening of community poetry, in whatever style or genre you want to call it.