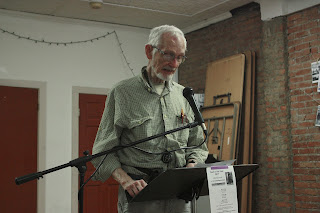 It’s always good to hear the “regulars” here each month & tonight even a new voice, & tonight’s featured poet Jordan Smith. But first, to invoke the Muse, a tribute to a recently gone local poet Esther Willison. I read a poem Esther had written not long before she died “A Limb, Out On.” Malcolm Willison, Esther’s former husband, also read a poem, a tribute he had written this morning “Esther.” Esther was a poet & a Mom & a social activist. We miss her.

Alan Catlin read “On Hearing 2 Army Rangers are Killed by Friendly Fire in Afghanistan” a poem about the death of the football player Pat Tillman & it’s coverup. A new face & voice was Jon Conlan who introduced himself with “Ladies & Gentlemen” “…I’ve got something to say” a forward-looking political dream. Joe Krausman responded to a poem, titled “Joe Krausman,” that I had read last night at Arthur’s Market, with his poem “Dan Wilcox” a conversation in Heaven. 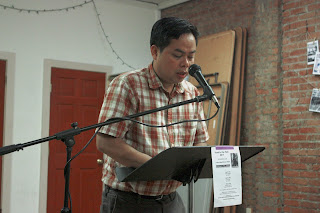 The poet best known as BK, who had been a featured poet here, was back to read a love poem about what poetry doesn’t do, & what it really is. W.D. Clarke read his historical ballad about the Battle of Greasy Grass, “Their Last Stand,” the Battle of the Little Big Horn from the native people’s point of view. 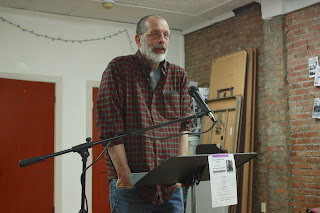 Tonight’s featured poet was Jordan Smith who teaches at Union College & has a number of poetry books available in bookstores & as an e-book (e.g., Clare’s Empire). He began with a couple poems from Clare’s Empire, a work based on the life of the English poet John Clare (1793 - 1864), “An Economy of Poetry” & “Clare’s Badger & the Arrest of Big Bill Haywood.” Then on to new poems, the first a memoir of a friend at an open mic in Rochester, NY years ago, then “Another Problem with Mindfulness,” a political poem “November 2016” which evoked Lorca & Whitman, & one from a writing assignment “MacBeth Revisited.” A brief episode of syncope inspired a poem on being self-absorbed & seeing the coverage of the riots in Ferguson, Mo., then a poem on the voice of God “Who Would Have Thought the Saxophone (for Charles Lloyd),” the poem “Sleep” referenced Plato’s “The Republic,” & he ended his reading with a short philosophical piece, “The Ecstatic Moment.”  A relaxed, but engaged reading fit for the Social Justice Center.

After the break I read my poem “Lew Welch in Albany,” inspired by a poem by Jordan Smith. Rich Jerin returned tonight to read “Relative Walker,” for which he read a prepared, poetic introduction. Rick Harrienger included handouts of “Parisburg,” a political poem he constructed this afternoon, having members of the audience each read a stanza. The last poet of the night Betty Zerbst said that her poem “Summer Dance” is proof that the other poets here tonight “write like guys while I write like a girl,” a piece in rhyme about deer.

Third Thursday Poetry Night takes place at the Social Justice Center, 33 Central Ave., Albany, NY each month, at 7:30PM, with a featured poet & an open mic for the rest of us.
Posted by DWx at 6:03 PM