Back to Schenectady again & this welcoming reading series with our host, chanteuse Catherine Norr. First, some of the open mic before the scheduled featured poet, with Alan Catlin reading 2 poems with the same title “Last Night I Dreamed This Would Happen” both posted on the Blog 36 View of Ononta’kahrhon.  Richard Jerin read 2 poems, like letters written to others, the first titled “Rebel Heart” with its images of Winter, the 2nd addressed to his daughter. 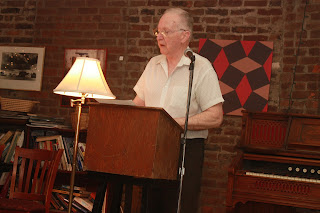 Paul Amidon read a memoir of childhood “Playpen,” then one about himself & his poetry “Minor League Poet.” Ginny Folger told us about “What the Birds Know.” Scott Morehouse did a performance, from a novel set in the 1920s, as Red Hot Momma & sang “The Dinner Pail Blues.” Scott Hicks said he was reading 2 poems from his Wester heritage, “Woman on the Edge of a Field” & “Day Cloud” as a youth, railing against loneliness & emptiness. 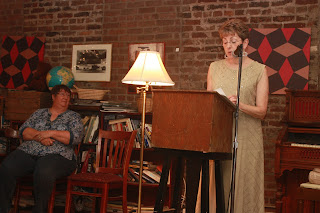 The featured poet, Sandra Manchester, was new to me, but well-known to Catherine & others as a long-time member of a Schenectady poetry group. She began with a poem remembering watching fog as a child & her family’s poverty, then a couple more poems about her mother, “Morning to Dusk” & “A Month Since Mom’s Passing” filled with the details of everyday life. From a poetry workshop she read another memoir piece, written 3 different ways. Other poems from the everyday included the verbatim “What I Overheard at the Laundromat,” “4th of July Parade Cobleskill,” & “Lemon Pie.” Other poems from a workshop were a bouquet of Nature/rural poems, then she ended with a poem about her first memory — in Kindergarten.

After a break, Catherine Norr returned with a couple poems of her own, one the story of her partner Dave’s Dad in Montana going off to war, the other a praise litany that she said was a “gratitude poem.” Susan Jewell read “The Myth of the Wild Oyster,” inspired by Camus’ The Myth of Sisyphus. Jackie Craven read a persona poem in which a wife complained of her ill husband. Betty Zerbst read 2 poems inspired by the suicide of a young person, “Why, Michael?” & a sort of answer to that question “Deep Despair.” 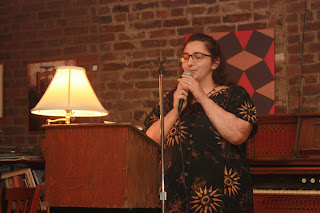 Angelina J. squeezed in 3 poems, “Mother,” “Strawberries” (a provocative mix of gardening & sex), & a piece about “Bridal Barbie,” childhood & marriage, “The Beauty in the Box.” Rich Frieberg did a quick piece from memory. I ended up as the last poet of the night & in honor of the anniversary of the birth (& death) in July of Frida Kahlo, I read 2 poems from my series on Frida & her affair with Leon Trotsky, “Distributing Arms” & “Self-Portrait Dedicated to Leon Trotsky: Between the Curtains.”

This is the place to be on the 2nd Wednesday of each month in Schenectady: Arthur’s Market by the monument in the Stockade Section, 7:30PM — featured poet & an open mic for the rest of us.
Posted by DWx at 3:38 PM