Back among the trees, with our host Alan Casline to warm up the space with a little open mic before the featured poet, the Venerable Dennis Sullivan.

Joe Krausman got the #1 spot on the sign-up sheet & began with a poem about playing the silence “Cello Lesson,” then recited a short rhyme on Love. Paul Amidon read a descriptive memoir “Spring at Lake Abenaki” then a poem on aging & death “Double Down.” John Abuhl read his most recent poem “Repetition” (in Nature), then one on death written in May “Salvation,” & a short philosophical essay “We Seek the Everlasting.” Howard Kogan’s 2 poem were on related themes, “Reading as Writing” & “Poets at the Open Mic.” 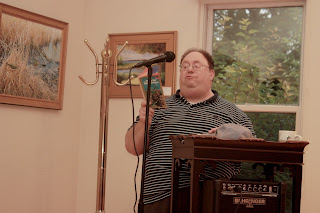 Don Levy made a rare appearance here, began with one of his own “#CoffeHouseReads” about taking pictures of books, then a poem by mid-20th Century poet Weldon Kees, “Aspects of Robinson.” A.C. Everson’s poem was a tasty one about the chutney & creamed cheese she brought tonight from “Joan’s Kitchen.” Mike Conner read pieces on a variety of topics, “Green Tea” after the death of a friend, “Mid-Summer Night Dream” on the heat, & a political essay “Civility & Diversity.” Dianne Sercik’s poem “Waking Up on the Wrong Side of the Moon” included the fertility deity Kokopelli, then read a piece considering “original sin” “Fortress of Innocence.” 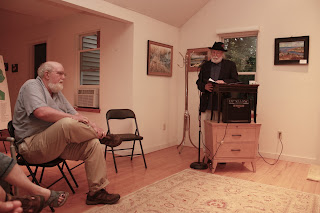 Dennis Sullivan is one of the former hosts of the former “Sunday Four Poetry” in Voorheesville. His poetry is usually in the pensive, mediative mode, as were the poems he read tonight, beginning with “Recapitulation Theory,” then a poem for Gregory Corso “The Sweet & Endless Season. Even his titles are philosophical: “Exegesis of the Heart,” “Complexity It Is,” & “When Life is No Longer a Hobby.” The love poem titled “I Can Think of Nothing Else” was to his wife Georgia Gray, & he ended with “Elegy Upon the Death of a Public House” for the now-shuttered Smith’s Tavern in Voorheesville, sorely missed by poets & other drinkers.

After a convivial break, Tom Bonville brought us back to poetry with 2 memoirs of Troy & his Grandfather, “The Pull of the Water,” & “Fire on the River, Troy 1959.” Tim Verhaegen also read a memoir piece, this from 1994 dating black guys. 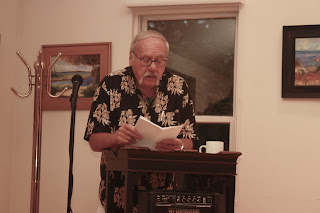 Mike Burke, another former host of “Sunday Four Poetry,” began with a descriptive piece of the grandstand at the Saratoga race track, then a poem about the last days of “Suzie the Good Dog,” & read Cathy Anderson’s poem “Ocean in Winter” to honor this recently-gone local poet. Frank Robinson waxed philosophical with “The Hard Problem” considering the question “what’s it like to be me?” Hey, I always tell people “be you.” My poems were “Obliteration,” “That Apparition” (which responds to a poem by Dennis Sullivan), & the very brief “Amitabha.” Alan Casline also read a poem by Cathy Anderson “The Last Good Day” about sex & dinner in the afternoon, then his own poem for Cathy “Whirl on the Dance Floor,” & the ironically titled “Recipe for Disaster.” Tom Corrado read from a new series of 14 line poems “Butt-Dialing Uber & Other Sanitized Shorts,” he read Season 4 & Season 15 (but they sounded like his “Screen Dumps”). Julie Lomoe was the last reader on the list & talked to us apropos of nothing about her new website, & then read a piece of prose “Eclipse of the Super Bowl Moon.”

This series continues into November on either the 1st or 2nd Friday of the month, at 6:30 PM in the guest house/visitor center of the Pine Hollow Arboretum, 16 Maple Ave., Slingerlands — come early for the pot luck.
Posted by DWx at 8:27 PM