It’s been months since I’ve been able to get to this weekly word scene at the Troy Kitchen, Monday’s are a busy night for me. But I always have good intentions to go & tonight I put the action with the intention. I was pleased to see that Ian Macks was the featured poet, who will be reading at Poets in the Park July 22 with Liv McKee. But first the open mic.

Our lovely poetic host D. (for Danielle) Colin got the words flowing with her poems, the first celebrating the color of her skin, black & beautiful, another on her quiet pen & listening to the other sounds around. I ended up first on the list (which gradually filled as the night wore on) & did my jazz “Saturday Hawk” & “What Makes America Great #20” from my series of True Stories of the Trump Era. Mz Tu performed her outrageous “Balls & Bitches” then a piece on anger “Poison & Venom” (one does not want to piss off this lady).  Dawn Howard was visiting the area from the South & read 2 poems, both like religious or self-help preaching, “Flawless” & “Love Is.” 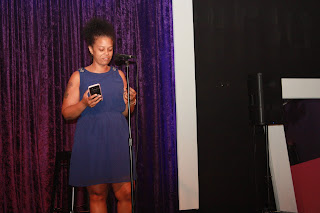 Hope said this was her first time (a Virgin!), began with a love poem, then another titled “I Want To” envisioning what love should be like. Kwesi had shown up a few times at the Social Justice Center, recited “A 70s Love Story,” started to introduce another piece but abandoned it. Jay began with a short piece titled “Living Room” then one titled “Real World” a critical piece about social media that, ironically, he read from his smart phone.  Elizag did a 3-minute Slam piece on Muhammad Ali & racism. 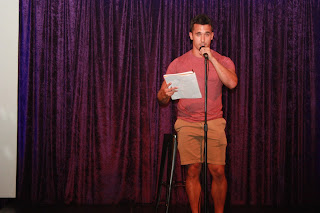 Tyler read a poem to his sister “Don’t Kid.” Dachele was here for the 1st time & did another piece on social media (& being lonely). Kaylie was also a virgin 1st timer & read a relationship rant. Poetik is an experienced reader/performer on the scene & I hope I got the title of her piece correct because it was marvelous “Education Dirty Poem.” Still another 1st timer, Jordyn, read a love poem just written today. Allie read a journal entry, then a poem based on it that she just wrote at the bar, a bit of self-affirmation. 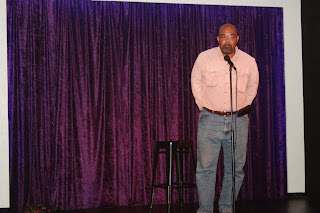 Shed, another 1st timer, was also into self-affirmation, read a piece on the importance of loving yourself. His daughter, Mariah (Barber), a familiar voice from other venues, returned us to the social media theme (also read from her phone), then a tender piece on her father & his advice. Katelynn, who is obviously used to performing & coached, did a piece “Free Falling” then “Midnight Blue GT500” as she slips into a Slam accent. 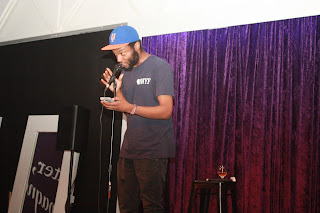 The night’s featured poet was Troy-native Ian Macks; he began with a poem about being yourself, not trusting idols, then other personal poems about relationship gone bad, & others about a good friend messing up his life. He read a couple of short poems from a 2014 book, “Dr. Manhattan” & “Cradle.” Some poems about Troy included “When Machinery Engulfs Everything” based on a street mural, another on the 4th of July in Troy, & a grim picture of a guy living under a tarp behind a Troy strip mall. & there there more about relationships & about couch surfing during hard times.

One feature of this venue is the “group poem” created during the reading, an exquisite corpse, that Danielle read at the end — & against the call from one of the food vendors “69, number 69!” as if it were a part of the poem, or at least an invitation. It’s a wonderful venue, but Danielle has the annoying pattern of asking us to applause as she reads the name of the next reader, which often overwhelms the announcement making the name inaudible.

Poetic Vibe is every Monday at the Troy Kitchen on Congress St., 7:30PM, for a donation that helps pay the featured poet.
Posted by DWx at 8:02 PM